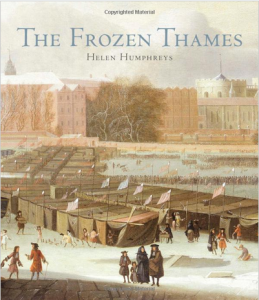 In its long history, the river Thames has frozen solid forty times. These are the stories of that frozen river.

Wrap up warm before jumping into Helen Humphreys' republished book. The Frozen Thames offers 40 short tales about the ice-bound river, arranged chronologically from 1142 to 1927 (dates that might raise the eyebrows of the historically attentive, but there are reasons).

Each vignette is fictional, but many include real events and people. We dip into the frost fairs of the 18th Century, join Tudors hunting hares on the solidified Thames, and tread with fear in the footsteps of someone caught on the melting ice. The book is, by turn, sportive, poignant and historically insightful. But the joy is in the details: the absence of songbirds during crueler winters than we know today; the travails of the innkeeper, thwarted by frozen ale; the miracle of fresh fruit in midwinter.

With the demolition of Old London Bridge in 1832, a great barrier to the flow of the river was removed. The later embanking of the Thames narrowed, deepened and hastened the flow. It is unlikely to freeze again while humans still control the city. This book allows us to share in a winter spectacle known to almost every Londoner for 700 years, but which no Londoner will ever experience again. Beautiful stuff.

The Frozen Thames by Helen Humphreys was originally published in 2008 by Mcclelland & Stewart Ltd, but is republished 1 November 2012 by Union Books. Buy here.