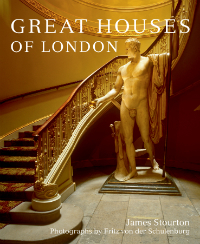 We get sent all kinds of tomes about the capital, from tourist guides to scholarly dissertations. What we've never received before is a 2.5 kg wrist-snapper of a book, with a colossal naked Napoleon on the front cover.

The lewd emperor is the centrepiece of Apsley House, former home of the Duke of Wellington at Hyde Park Corner. It is but one of 41 superior dwellings set out by James Stourton in this most weighty of books. 330 larger-than-A4 pages take the reader on a chronological and sumptuously illustrated journey, from the medieval Lambeth Palace up to Modernist houses and the home of Richard and Ruth Rogers. Some are world famous (10 Downing Street), but many will be unknown, even to those living a few roads away.

The author provides just the right amount of detail for each house: a little about the colourful poshsters who dwelt within; a few paragraphs concerning the architecture and furnishing; and the sometimes unusual changes of purpose each property has undergone. Stourton, Chairman of Sotheby's and an old hand at discussing the playthings of the rich, occasionally wanders into his own descriptions, giving personal insights into a great house. This first-person tone is unusual in such a book, and sets it apart from, say, an English Heritage guide. The photography, by Fritz von der Schulenburg, also deserves commendation for bringing out the detail in some diverse and unusual spaces.

The book is also full of splendid historical nuggets (and, here, we're not talking about Napoleon's nethers). Did you know that the beige colour on all the buildings surrounding Regent's Park is a relatively recent introduction? Or that Nazi soldiers once marched down the Mall carrying a Swastika-draped coffin, that of the late German ambassador whose former residence retains an Albert Speer staircase? If Led Zep guitarist Jimmy Page ever invites you round to his mad, medieval medley of a house, you say YES!.

As coffe table books go, this is a surprisingly entertaining read. You just might need to invest in a sturdier coffee table.

Great Houses of London by James Stourton is out now from Frances Lincoln. Buy here. The author will give a talk about some of the houses at the V&A on 26 November 2012.