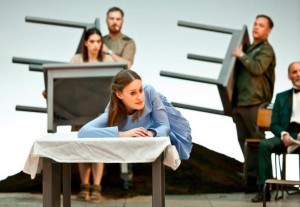 It’s never going to be a great night at the theatre when you’re sat beside a drunk who keeps hiccoughing foul odours from the rotting chasm of his gut into the air next to your face. But even without having to endure a vile, stench-emitting ogre in your breathing space, this would have been a wearing evening.

The main problem is one of scale. The Young Vic is quite an intimate theatre. Yet the actors perform as though we were 100 feet from the stage, rather than 10. It is not necessary to roar. Neither is it necessary to continually ring a massive bell so deafening that half the audience cover their ears in actual pain. But let’s put those irritants aside.

Aussie director Benedict Andrews’ unconventional rendering of Chekhov’s tragicomic tale of three educated sisters stuck in a provincial town, searching for meaning in their dreary, privileged existence, definitely emphasises the tragic over the comic. Unless your idea of hilarity is a deaf old man everyone keeps shouting their lines at, you’re in for a pretty bleak time. (To be fair, this DID seem to do it for some of the audience so, y’know, each to their own.)

The sisters – duteous schoolteacher, Olga (Mariah Gale), listless Masha (Vanessa Kirby) and young, idealistic Irina (Gala Gordon) – are too earnest to be very interesting, with one or all of them bursting into sobs every five minutes; though moments when Ab Fab’s Patsy shines through Kirby’s Masha do offer some levity. Emily Barclay too brings some comedy to the proceedings as their brother’s gauche New Zealander wife. As for the all-too-often bellowing men, they seem to blend into one in their army fatigues. But Danny Kirrane as Andrey, a slobbish washout of a young man once full of potential, invests the play with a welcome bit of farce. More of this please.

Johannes Schütz’s set is brutally minimalistic. Overhung by a light box, the stage is made up of grey tables nestled together and, as the characters’ lives and dreams begin to disintegrate, it is dismantled from underneath their feet. It’s a clever device but – honestly? – boys carrying tables in and out the auditorium is quite distracting, really. And to spread it over the entire second half could be seen as a little indulgent.

Andrews has an eye for composition and arranges his cast in intriguing tableaus, but this rather Brechtian production seems uncohesive and episodic. Much is superficial: emotion fails to penetrate the surface, both crying fits and parties erupt out of nowhere, their raucousness, lacking reason and depth, never quite credible. A group rendition of Nirvana’s Smells Like Teen Spirit is fun, but it doesn’t sit convincingly with the action either side of it. The whole thing is like a dream, a surreal montage of disjointed scenes – we don’t get a sense of a world or of real characters, making this a largely incoherent, alienating, one-dimensional affair.