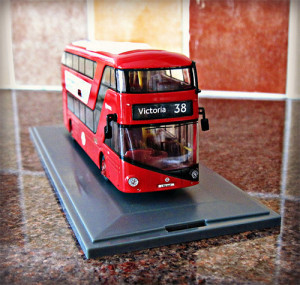 The BBC's Tom Edwards has uncovered a document (PDF) prepared for a board meeting next week that recommends Transport for London place an order this month for 600 New Buses for London, aka NBfL, the 'new Routemaster' that rolled into service earlier this year.

The goal is to have all 600 in operation by April 2016. The first batch of 30 would be introduced to a route in April 2013, and a second that August. A little over 200 vehicles would be rolled out in 2014 and 2015, and the remainder by the following April, leaving a nice little inheritance for the Conservative mayoral candidate (although if the prototype vehicles are any indication, we should probably treat these dates as flexible).

600 vehicles represents a little under 10% of London's 7,500 buses; not a comprehensive amount, but certainly enough to take the NBfL far across the capital.

One of the more complex matters surrounding the procurement is the fact that TfL are planning to buy the vehicles outright. The normal procedure for existing buses is for the operating company to buy or lease the vehicles themselves. This was originally the plan for NBfL. However, concerns about potential insurance liabilities (if someone were to fall from the rear platform, the operator would be solely responsible) and the still murky situation around using a conductor, meant that companies were leery to purchase the vehicles outright.

TfL are defending their choice as a cost-effective model, and will also "specify to the operators the hours of operation with a conductor in open platform mode and the mix of conductor and driver-only operation as appropriate"; however, the extra costs associated with training and staffing the conductor "will be borne by TfL through the route contracts". Which, after the expense of paying for the development and buying the buses, makes the whole exercise seem something other than cost-effective, particularly as the vehicles will not be sold on, as is standard practice, but used throughout their operational life in the capital.

London Assembly member Darren Johnson has been quick to attack the news, calling it "madness" and arguing that Londoners will face price rises and cutbacks in other investment projects to pay for it.

Since launching in February, the new buses, of which eight prototypes are in service on the 38 route, have proved immensely popular with Londoners, although small criticisms persist: the lack of windows makes the upper deck stiflingly hot at times, despite TfL's claimt that they have amended the "saloon air cooling systems". Hopefully the new vehicles will be better able to address these issues.