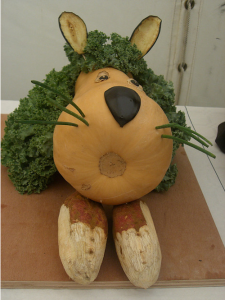 Take part in the flower and vegetable competitions, stoke a steam engine, or pet the farm animals; see how a sheep dog does its thing, then watch other talented canines jump through hoops of fire and ride bikes. Also, horse jousting!

It almost didn't happen. Lambeth Council, blaming the Olympics for draining police and other resources, announced the show's cancellation earlier this year. A subsequent campaign by Brixton Blog and others demonstrated the importance of the Show to local people. To its credit, the council listened and reversed its decision, shifting the Show from its usual July dates to mid-September.

Image: a wonderful bit of vegetable art at the 2006 show by Mondoagogo in the Londonist Flickr pool.