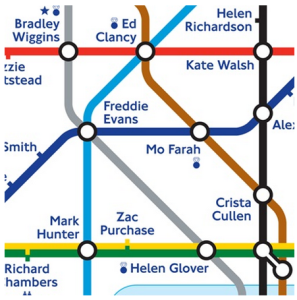 Transport for London has finally started embracing, and even cashing in on, the ever-popular idea of mashing up the Tube map. This new chart, released today, replaces station names with medal-winning Team GB Olympians (and, indeed, horses). A separate map showing Paralympic heroes will be released later this year.

The map is the work of sports journalists Alex Trickett and David Brooks. Each line represents a different discipline, with the Piccadilly, for example, representing athletes. As the press release notes, the map includes a few cunning correlations.

Stratford station, as the gateway to the Olympic Park, is renamed after Sir Chris Hoy, the most successful British Olympian of all time. Appropriately, Wimbledon station is named after Andy Murray, and Zara Phillips replaces Royal Victoria, the station dedicated to her great, great, great, great, grandmother, Queen Victoria.

Alas, there weren't quite enough medalists to represent all the stations, so the map doesn't stray much beyond Zone 2.

The map follows on from TfL's first experiment in Tubesploitation, which charted former great Olympians.

The Team GB Olympic winners map is on sale now for £49.99. Prints are limited to just 2012 copies, so make like Usain Bolt and get in quick.