London Rubble: How The City's Soil Gets Recycled

By M@ Last edited 45 months ago
M@ London Rubble: How The City's Soil Gets Recycled

Where there's muck, there's brass. It's certainly true in London, where the soil, spoil and detritus of the city has for centuries been put to good effect. As part of the Crossrail dig, excavated earth was transported over to Wallasea Island in Essex as part of efforts to create the largest artificial nature reserve in Europe. This is just the tip of the mudberg in London's long history of dirt recycling. 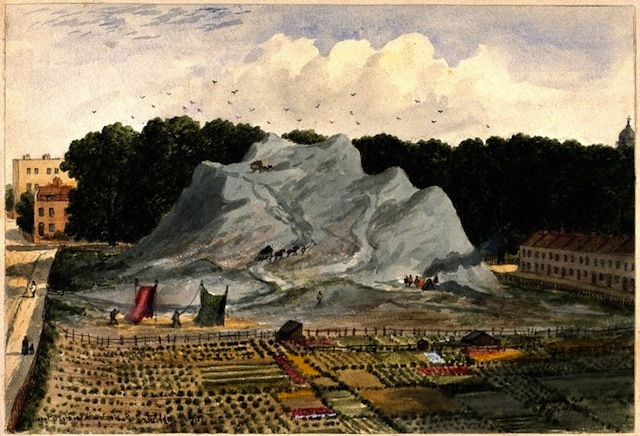 This teetering heap, roughly on the site of King's Cross rail station, was a major landmark on what we now call the Euston Road in Georgian and early Victorian times. A similar excrescence plays a grubby role in Our Mutual Friend by Charles Dickens. If you look closely at the image, painted by EH Dixon in 1837, you'll spy two wagon-loads of crap working their way to the summit. The heap was basically a dumping ground for road sweepings and fireplace ash, and must have posed something of a risk for the smallpox hospital quivering in its shadow. When it came time to build King's Cross station in 1848, the heap's days were numbered. Supposedly, it was bought by the Russians, who mixed the ash into bricks to help rebuild a war-ravaged Moscow. We've always felt that story smells appropriately whiffy, given that a war-ravaged city would hardly be lacking in its own ash, but that's the legend.

Wembley Stadium is turned into a quartet of buxom mounds

The four mounds of Northala Fields near Northolt look something like ancient ritualistic barrows. Appropriately, they conceal rubble from a symbol of that modern religion: football. The heaps were created in 2007 from the leftovers of old Wembley Stadium. Stave Hill, in Rotherhithe, is a similarly recent creation, formed in 1985 from the rubble of demolished dock-side buildings.

The Blitzed East End becomes a load of football pitches

During the Blitz on London, an estimated 1 million homes were destroyed or damaged. Some of the rubble was, of course, recycled during the rebuilding, but millions of tons of brick and dust had to be disposed of somewhere. Step forward the Lea Valley. So much rubble was disposed of in Hackney and Leyton Marshes that, according to one Museum of London archaeologist we recently spoke to, the ground level was raised by 3-7 metres over large areas. Bristol upstages London, however. That city's Blitz rubble was shipped over to the US to reclaim land in Manhattan.

The Old Nichol rookery in Shoreditch was one of the most notorious hives of crime and poverty in Victorian London, immortalised in Arthur Morrison's A Child of the Jago. The maligned neighbourhood was demolished at the end of the 19th Century, and the still-extant Boundary Estate rose in its place. At its centre stands the Arnold Circus bandstand, built on top of the rubble from the demolished housing.

The Metropolitan Line is responsible for Chelsea FC's ground

London's first underground railway opened around 150 years ago between Baker Street and Farringdon, which we now know as the Metropolitan Line. The earth excavated from the cut-and-cover construction process was apparently carted over to Fulham, where it eventually got incorporated into Chelsea's ground at Stamford Bridge. Christian Wolmar presents this as unreferenced fact in his book The Subterranean Railway, but others have speculated that the heaps were more likely derived from the Piccadilly Line, constructed at the turn of the 20th Century.

Sticking with sporting matters, it's believed that the material underlying Lord's cricket ground was excavated during construction of the Maida Hill Tunnel on the Regent's Canal. The spoil was part of a compensation package from the canal-building company to mollify Thomas Lord, whose cricketing plans were affected by the canal's construction.

As well as the development of a new nature reserve, mentioned up top, some of the spoil from the Crossrail dig were put to more homely use. Three trucks of earth from the Canary Wharf dig were transported to Mudchute Farm on the Isle of Dogs to create a new chicken run and vegetable patch.

Update: Excavated soil from the Olympic Park is being used to reclaim and recontour land in Wat Tyler Country Park, near Basildon, Essex.

This is just a selection and there are no doubt many other examples. Please share further stories in the comments.

See also: London buildings that have moved around.