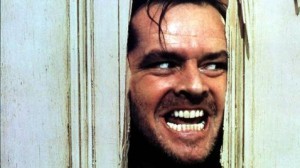 We get an horrific taste of the roaming site-specific cinema...and there are still two dates ahead for you to book.

Sitting in a cemetery at night might sound like torture. Doing this while watching The Shining could be a sure-fire way to become an insomniac.

Nomad Cinema sealed off Brompton Cemetery for the night, setting up a large screen between two family crypts. Nerves settled by a brilliant array of burgers and snacks, the audience sat down between gravestones to watch Jack Nicholson descend into madness. The cemetery was an ideal choice, adding to the film's unnerving qualities. The fear with site-specific cinema is that the setting becomes a gimmick, but if the film and location work in tandem it adds a theatrical dynamic. The weather seemed to be on board as well — the sun set as the opening credits rolled, and the heavens opened as the horror began. Nomad staff were ready though, frantically handing out ponchos the moment the rain fell.

The film itself remains a classic thriller, winding deeper into the dark realms of paranoia and isolation. No one does manic psychopath quite like Nicholson. Turned up to eleven from the word go, he still finds avenues for humour and warped logic which add further to the film's growing danger. Stanley Kubrick's echoing soundtrack and the film's bleak setting allay perfectly with the showing's morbid setting — a match made in horror-fan heaven.

The lax policing of online piracy and the sheer number of vacuous Hollywood films — we're looking at you Michael Bay and Adam Sandler — has left the cinema industry fighting to survive. Secret Cinema has set the standard for immersive film experiences, turning the cinema into a fairground and making their audience part of the movie. Nomad Cinema promise to roam across the capital, projecting brilliant films from an "inspiring range of beautiful, curious and downright strange screening locations". It must continue to push boundaries, converting everyday mundane, even unattractive, settings into magical cinema venues, so that London gains another excellent alternative to the soulless multiplex.

Future events from Nomad Cinema include The Artist in Fulham Palace and The Big Lebowski beamed across Queen's Park. For more information see the Nomad website.