What's For Lunch? The Orange Buffalo 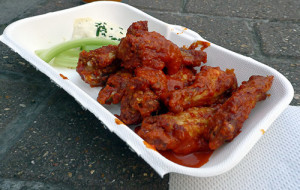 A relatively new food truck perched in the yard within the Truman Brewery complex off Brick Lane, The Orange Buffalo does hot wings the way they're supposed to be done: decadent, messy, and off-the-scale spicy. We'd go so far as to say they're some of the finest you're likely to find in London.

Six quid-fifty will get you eight buffalo wings (along with a drink and chips / onion rings), served up on a cardboard tray with some blue cheese dip, celery sticks and a choice of sauce. Now this is where things get interesting. Three sauces are on offer: the standard American style, the piquant woof-woof, which is made from a blend of Naga and Scotch Bonnet chillies, and the Viper.

The latter, recently kept behind the counter so as not to frazzle the taste buds of unprepared diners, contains a small amount of a Naga Viper chili which, at around 1m on the Scoville scale, is one of the hottest in the world. For some perspective: your standard Jalapeno is around 5,000 Scoville units, while pepper spray gets up to 1.5m or so.

Having enjoyed the pleasant bite of the woof-woof, it was on to the Viper. It doesn't disappoint: the heat is sharp and intense, and quickly reduced us to a lachrymose mess. Which is half the fun. But probably best not done if you have to return to work afterwards: you're likely to end up messy.