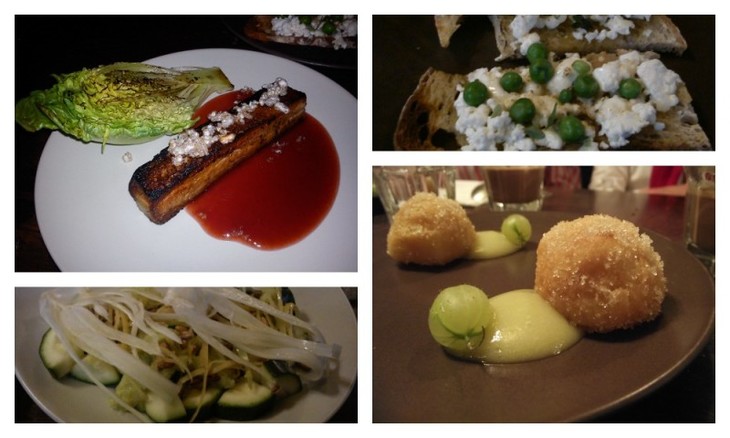 Culinary trio Blanch & Shock have catered for events and supplied exploding birthday cakes up to now, spending the last four years cooking in a van, in warehouses and in art galleries. They are now resident at The Endurance in Soho, as part of the Food Spectrum initiative and are offering a weekday lunch menu, evening sandwich menu (Tuesdays, Wednesdays, Thursdays only) and a Saturday night special tasting menu until 1 September. It's a treat to have them in one easily accessible place because, as we found, it's nice to have grilled ox heart, miso prunes, hay flamed mackerel and brioche doughnuts with gooseberries for a midweek lunch.

Lunch is non-bookable and served in the dark, flock-wallpapered pub between 12pm and 3pm. Small plates are £2 to £7 each in fish, meat, cheese, vegetables and sweet categories; none are strictly mains or sides. We tried the 17 hour slow-cooked pork belly, wild plum sauce and charred little gem lettuce — buttery, meaty slow-cooked pork was balanced perfectly with the sweet and sour sauce and crisp, refreshing lettuce. The goat's cheese was strong but light curd on thin sourdough toast, dotted with peas and tiny herb blossoms, a simple and satisfying combination. And the courgettes were cooked two ways, served with toasted spelt seeds, fennel and lemon zest, making it equal to the meat and the cheese, and definitely not just a side dish.

These small plates in a short menu offer enough experimental touches to feel special but at good value. While a bit unusual, everything is edible and not weird for the sake of weirdness. The lunch menu changes each week and the chefs change each month; keep up with The Endurance on Twitter to see what is on offer.

Lunch can be had for £15-£20 per person without drinks. Dishes range from £2 to £7 each. Tip: EAT ALL THE BREAD AND BUTTER — it's fine sourdough from St John, and the butter is churned and cultured over several days by the Blanch & Shock team.

Blanch & Shock will be at The Endurance, 90 Berwick Street, London W1F 0QB, until 1 September.