How King's Cross Station Was Designed In The Last Ice Age

This is the main concourse at King's Cross station — a structure that nearly everyone would agree is both eye-pleasing and a much-needed boon to the previously overcrowded station.

It's been likened to many things, including a flying saucer, the Starship Enterprise and, more prosaically, the roof of the British Museum. To our eye, it resembles a glacier. Like this.

For those of a psychogeographic bent, this similarity is somewhat apt. The concourse's circular form was quite possibly dictated by the melting of a glacier in a distant ice age... at least if you want to believe the historical thought experiment that follows. Here goes...

See that building on the right of our top image? That's the Great Northern Hotel, which opened in 1854 and is often described as the first purpose-built hotel in London. Here's how it looked around 100 years ago.

The hotel is Grade II listed, so couldn't easily be knocked down to make way for the modern concourse, and nor did anyone want to knock it down. Instead, its gentle curve was incorporated into the designs.

As you can see from the photo up top, the internal arc of the old building directly influenced the outer curve and therefore full diameter of the modern addition. Other shapes could have been considered, but in choosing the circular architecture, the size and shape of the new concourse were predetermined by the plans of Lewis Cubitt more than a century and a half ago.

But why did Cubitt make his hotel curvy? It's not mere aesthetics. The frontage of his hotel was designed to snugly follow the curve of Pancras Road, as this map from 1862 shows. 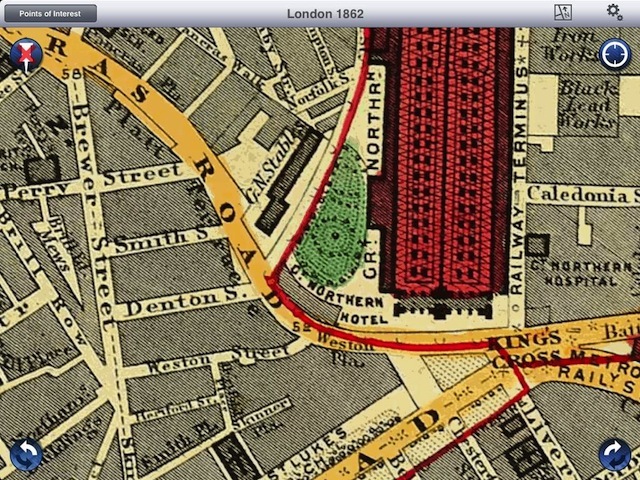 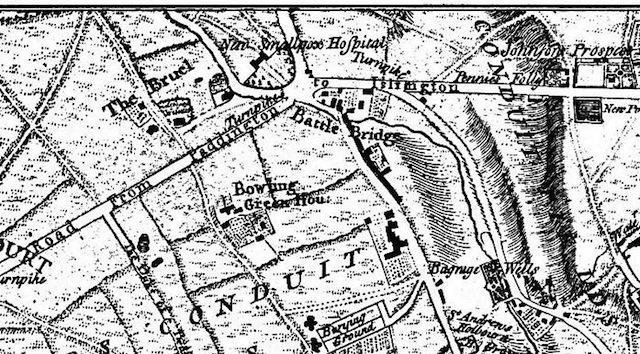 The John Rocque map of 1741-5 is the earliest real chart of the area. You can see the now-buried River Fleet running through the valley to the middle-right of the map (an area still characterised by steep gradients, such as Vernon and Weston Rise). Follow it to the west, and the suggestion is that it follows the L-shaped Pancras Road, to the right of the label marking 'The Bruel'. In other words, the ancient Pancras Road was built to follow along the banks of the River Fleet.

Indeed, here's an image of the sparkling waters in front of Pancras Road and St Pancras Old Church (just north of the map's border) from 1827, before the area was transformed by the railways. The church, by the way, has its own fascinating history, involving two of Britain's greatest novelists, a famous poet, the architect of the Bank of England, the origins of the red phone box, ancient Christian worship and The Beatles. Do pay a visit next time you're in the area. 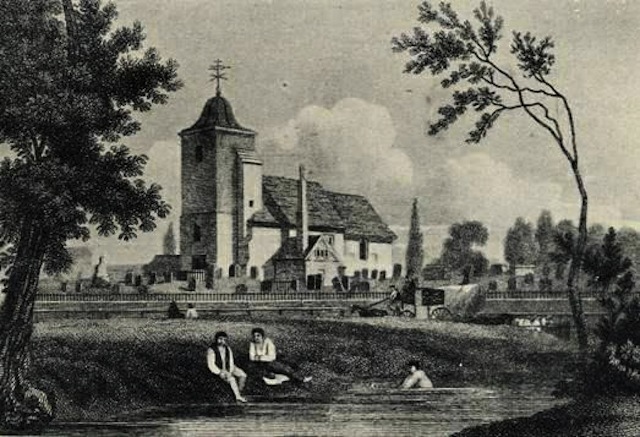 And how did the River Fleet come to be here? Well, this is the vague bit, but its current course was probably set by the tumultuous events of the last ice age, when retreating and melting glaciers altered the shape of the lands and rivers of north London.

So we have: glacier makes river makes road makes hotel makes concourse, which happens to look like glacier. Had that long-gone glacier melted in a slightly different way, we might now be catching trains from a wedge-shaped station, or enjoying a pre-boarding pint inside another oblong shed.