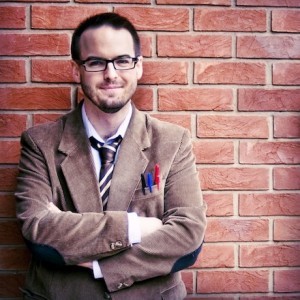 Our first night on the Camden Fringe and it's two solo comedy shows that both involve geeks, party poppers, self-examination and audience participation.

Will Howells has a jacket pocketful of wordplay, pedantry and puns to share. His first solo show extols the rules of perfect grammar but ponders its place in the modern world. He's the sort that corrects people at inappropriate moments and gets obsessed with stray apostrophes in toilet wall graffiti. But does he really give a shit about an Oxford comma?

Howells is an engaging, confident and funny performer with possibly the best OCD joke ever, a cracking opening gambit and a typo in his middle name. He's also a Countdown alumnus (he lost to a granny) who regrets the lack of competitive spelling in his childhood. Staging an impromptu spelling bee mid-show produces the most spontaneously funny five minutes, as he discovers one of his reluctant volunteers is actually Snipe London's reviewer.

You will laugh, you may learn, you'll want to punctuate properly. See Will Howells's Grammar School tonight at Etcetera Theatre, 6pm, tickets £7/6. 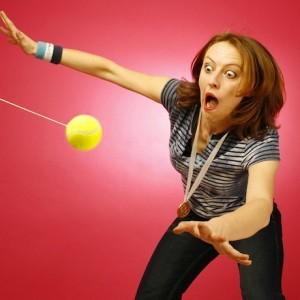 In 2006, Rosie Wilby started a campaign to make swingball an Olympic sport. 32 signatures and six years later, an Olympic swingball medal opportunity eludes her but it's high time for a life retrospective punctuated with some live sporting action.

If you've seen Adam Riches' take on Swingball, the scale of Wilby's set will disappoint you but she does have a 'windicator' that make table top recreations of matches against nemesis Robert Kilroy Silk and hero Martina Navratilova unexpectedly exhilarating.

Upstairs at the Camden Head is by no means packed but Wilby's wide-eyed, warm and self-deprecating tales of growing up in Ormskirk, discovering her sexuality and getting covered in goose-shit in a bid to be cool work really well with an intimate crowd. In sportswear she exudes an infectious energy that makes even the front row a funny and safe place to be.

Rosie Wilby's other show, How (Not) To Make It In Britpop, mixes comedy, music and storytelling and you can see it Upstairs at the Gatehouse, Highgate on Friday 3 August at 9pm, Saturday 4 & Sunday 5 at 7.30pm. Tickets £12/10.

Camden Fringe runs daily until 26 August. Open the programme at random, pick a show and go and see it.

Not sure about watching live comedy shows? Read our helpful guide.