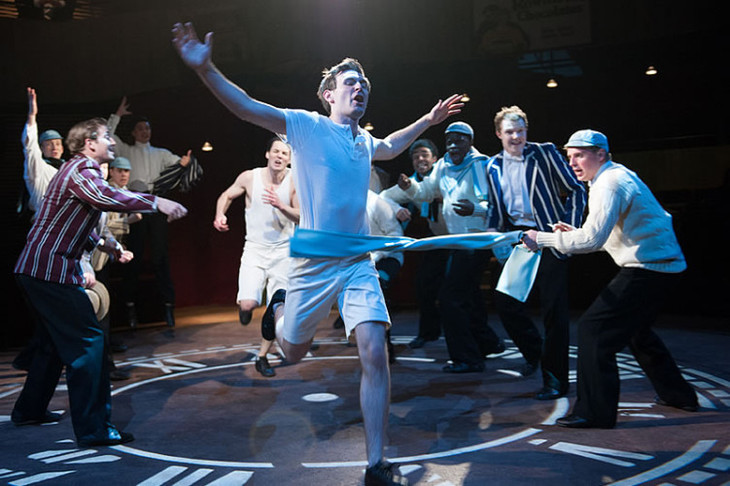 You know when someone says “this play will run and run”?  Well, in this one the cast certainly do…it seems rather unnecessary to re-review in detail Ed Hall’s exuberant Chariots of Fire which breasted the tape last night at the Gielgud trailing its four and five star critical track record from Hampstead.

The audience, fuelled by quite a lot of delicious free champagne, seemed wildly enthusiastic to greet it. Like the Usual First Night Suspects they undoubtedly are, Christopher Biggins was gladhanding anyone he did or did not recognize in the foyer, and @stephenfry tweeted at the end he was “still in pieces” although from what cause we couldn’t say.

It might have been the mildly jingoistic, flag-waving, Jerusalem-singing ebullience that surrounds the simpler tale of two rival athletes, one Scots one Jewish at the 1924 Paris Olympics, which brought a tear to the Fry eye. The production trades somewhat stagily on the Britishness of the whole occasion, wrapping the shivering plot in a greatcoat of Gilbert and Sullivan, and some entirely superfluous brass and wind – haven’t we had enough of forcing good young actors to play musical instruments? – in an extended piece after the interval.

The unique selling feature of Miriam Buether's design is the running track, which makes a figure of eight through the front Stalls and some newly-built back-of-the-stage bleachers: if you’re near enough, you’ll feel the breeze in your face as the athletic young men bound past, seated further away you might spot the breathlessness of a production that needs these gimmicks to simulate a perfectly good film.  The Vangelis music will get you, though, that’s for sure.

There are some excellent performances: in the most dramatic scene where he confronts the Olympic committee, newcomer Jack Lowden shines as the Scots missionary who won’t run on Sundays although this brinkmanship is a slight deviation from reality in Mike Bartlett’s script: Eric Liddell made his decision not to compete in the Sunday 100 metres event about four months before the Paris Games. James McArdle is equally fine as his rival Harold Abrahams and despite a superb cameo as his half-Arab coach Sam Mussabini – a relationship which could have been explored in much greater depth - Nicholas Woodeson is unfortunately wasted.

It was wonderful to see some genuine Olympians in the auditorium: to eavesdrop for example on handsome swimmer Mark Foster and his date praising the choreography which turns running into a stage art – they think Scott Ambler deserves an award - and to spot Sally Gunnell taking her parents out for the evening but still showing her Barcelona '92 sprint form by chasing after a taxi in a gorgeous but extremely tight sheath dress and four-inch heels.

Chariots of Fire runs until 10 November. Tickets here, although shop around online for discount offers up to the end of July.