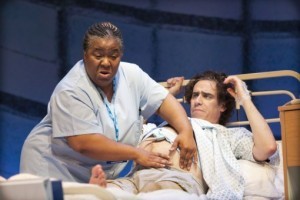 After the traumatic birth of Lisa and Ed's son, Ed, desperate for a daughter, decides to take the matter of completing their family into his own hands – or, more precisely, into his own artificial womb. Yup, by harvesting ovaries and transplanting embryos, men can now choose to gestate. Hallelujah.Roger Michell directs this new play by Joe Penhall.

It opens in a hospital room, where Ed (Green Wing’s glorious Stephen Mangan) lies swollen, emotionally volatile and ‘pumped full of hormones from arsehole to beak’. His spiky breadwinner wife Lisa (Lisa Dillon) sits by, soothing and patronising him by turns as he awaits the birth with growing anxiety – complete with wild tantrums over birth plans, epidurals and raspberry leaf tea.

Joe Penhall’s script is observant, meticulously constructed and laugh-out-loud funny. It’s not entirely inoffensive: Ed, in taking on the traditional role of the woman, becomes demanding, hysterical, needy and nagging, while Lisa, as ‘the man’, is the calm, rational figure of authority. So despite its surface-level subversion of gender norms, it actually rather reinforces gender stereotypes. But Penhall makes up for it with the line:

It’s always very difficult for men when they have these things [namely, fingers up bums, being treated like ‘a piece of meat’, etc.] done to them. It’s very humiliating for them – they have such different expectations of life.

YES, Joe. Thank you. And the play does make you think about what indeed it would be like were men to bear children instead of women. Suddenly, this huge physical and emotional ask of women – which is taken somewhat for granted – is seen in a whole new light.