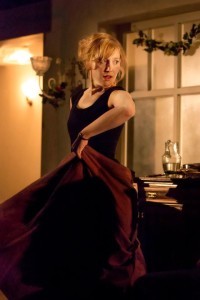 Carrie Cracknell directs this whirling drama, a new version of Ibsen’s 1878 classic written by Simon Stephens, which sees one woman’s reality fall to pieces – and, under the dexterous handling of this talented pair, as well as a first-rate cast, this modern, intense and utterly gripping production is one of the best we’ve seen all year.Hattie Morahan plays Nora Helmer, the doll of the house herself, a capricious, flighty young woman, who, maintaining a constant affectation of shamelessly flirtatious faux naif, masks her troubles well. And troubles aplenty lurk beneath this light, playful exterior. Victim to a manipulative loan shark, Nora must repay the money she owes and deal with the blackmail that follows, while keeping the sordid affair secret from her stuffy, self-righteous banker husband/pseudo-father, Torvald (Dominic Rowan). It’s only when the deception inevitably comes to light that she sees her husband and her marriage for what they really are.

The beauty of Ibsen’s masterpiece is that the issues at the heart of it continue to be relevant 130-odd years on. The backdrop of debt, borrowing and staffing cuts sits comfortably in a world where such matters are by no means foreign. And its feminist bent (unintended by Ibsen, who insisted the play was merely a ‘description of humanity’) loses none of its power today, where – as overtly or not – women are still seen by a large proportion of society as second-class citizens.

There are many impressive aspects of this production. Cracknell keeps her audience transfixed, carefully conducting the tension of the piece, orchestrating its rises and falls on the way to an electrifying climax. And the claustrophobia of Ian MacNeil’s revolving set – a cross-section of Nora and Torvald’s flat – with its narrow hallways and windowed partitions, that we might see through to action taking place in other rooms, really adds to the effect of Nora’s sense of the walls closing in on her. But without a doubt, the best thing about the production is Morahan’s extraordinary central performance as Nora. As the play goes on and her world begins to crumble, she begins to take on a more and more haunted look. Positively vibrating with anxiety and emotion, her impassioned execution of the role is truly exhilarating.Get yourself down to the Young Vic pronto. we can’t recommend this production highly enough.