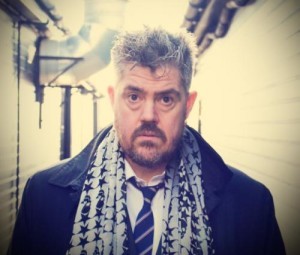 Sunday: We think today is the best day of the Cringe Festival at the Cavendish Arms. See Josh Widdicombe, Pat Cahill and Tim Shishodia, Cariad Lloyd, Daniel Simonsen (who was excellent supporting Simon Amstell earlier this year), Celia Pacquola, Lloyd Langford and Totally Tom. Shows starts at 3pm and are all free.

Catch three nights of double bill previews of Helen Arney's Voice of an Angle and Domestic Science at the Green Man, starting tonight (8pm, £4). Richard Herring and Joe Lycett test out new material at Happy Mondays in New Cross (8pm, £5.95). Or how about Phill Jupitus (pictured) and Marcus Brigstocke, doing a double bill of previews at Jacksons Lane for £15 (8.30pm)?

Tuesday: Do The Right Thing records the last in this podcast series at the Phoenix, with Justin Edwards, Linda Roman and Gareth Gwynn joining regulars Danielle Ward, Michael Legge and Margaret Cabourn-Smith (7.30pm, £6 / £4). We've been before and we liked it.

Wednesday: Shappi Khorsandi is back, this time with Tiernan Douieb and Marc Burrows, at a charity night for Action Duchenne. It's at the Adam and Eve in Mill Hill from 7.30pm, tickets £10 – to reserve email info@time2shineproductions.co.uk.

Mark Watson's doing a preview gig at the 100 Club. At £15 it's a bit pricier than the usual work in progress show, but the cheaper night at the Pleasance on Friday has already sold out (7.30pm). Still available at the Pleasance, there's sketch group The Beta Males (8pm, £5). Or if you fancied the sound of Late Night Gimp Fight earlier in the year, they're previewing a new show at the Soho Theatre (7.45pm, £5).

Friday: Sod the Olympic opening ceremony and head off to Rich Mix, where Isy Suttie, Paul Sinha and Tricity Vogue perform at an alternative party (7pm, £10).

Tony Law previews his show Maximum Nonsense at Deansways from 7.30pm (£5). Josh Widdicombe and Jessica Fostekew are a formidable double bill at the Camden Head (7.30pm, £3).

Bourgeois and Maurice are calling their new show Sugartits. See how it's bedding down at the Soho Theatre (9.30pm, £5). Totally Tom work out new sketches at Hen and Chickens (7.30pm, £7.50) and there's more sketches from Sheeps at Leicester Square Theatre (10pm, £5).

Book ahead: French speakers may be interested in bagging the remaining tickets to see Eddie Izzard do his Stripped show – in French – on 4 August at the Soho Theatre (9.30pm, £15).