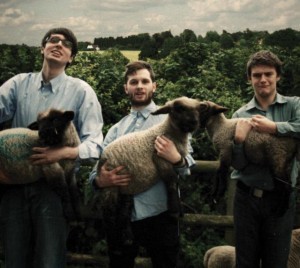 Ruth Bratt and Lucy Trodd usually improvise, but this is their first character show. You'll note on the We Got Tickets page that we've previously called them "wonderfully silly", so if that sounds like your thing get to the Hen and Chickens for 7.30pm (£8). Meanwhile, at the Pleasance, Helen Keen tests out new material about robots and Richard Herring's talking cock has a second coming (7.30pm, £10).

In Kilburn, Celia Pacquola, Bec Hill and Yanni Agisilou preview at the Good Ship (8pm, £4 / £5). Chris Coltrane previews his Edinburgh show, all about activism and Tory smashing, at the Camden Head, alongside the brilliantly silly Jigsaw  – individually known as Dan Antopolski, Nat Luurtsema and Tom Craine (7.30pm, £2). Watch them in action below.

Tuesday: Sean Lock, Danny Bhoy, Tony Law and Ed Gamble are in a tent at the Greenwich Comedy Festival (7.30pm, £24).

We saw a preview of Sheeps's (pictured) Edinburgh show a few weeks ago and loved its slick silliness. See their sketches for yourself at the Leicester Square Theatre (10pm, £5). In Putney, Andrew Lawrence, Thom Tuck, Sarah Callaghan, Tom Davis and Harriet Kemsley preview at Gits and Shiggles (8pm, £5). Or catch Tony Law's Maximum Nonsense and Bridget Christie's War Donkey at the Monarch in Camden (8pm, £4).

Wednesday: Storytellers' Club welcomes Emmy the Great and Elizabeth Sankey for a Sweet Valley High tribute, plus John Robbins and James Dowdeswell, at the Pleasance (8pm, £10 / £8).

Invisible Dot do another of their BBQ previews in Camden (free burger or hot dog in the interval, mmm) with Nick Mohammed, whose brilliantly realised characters are a cut above the rest, and Ben Target (pronounced Tar-jay) – the last time we saw him he wore literally all his clothes and crowdsurfed (7.45pm, £7).

If you've got the afternoon off, head to Camden to see Jessie Cave preview her show Bookworm at the Etcetera Theatre (4pm, £5). Later, Jess Fostekew is making a Brave New World at Hen and Chickens (9.30pm, £6).

Saturday: Joe Lycett, Toby Hadoke (who you may have seen a few years ago doing a show about Doctor Who) and Pete Johansson are at the 99 Club's Islington outpost (8.15pm, £10 online).