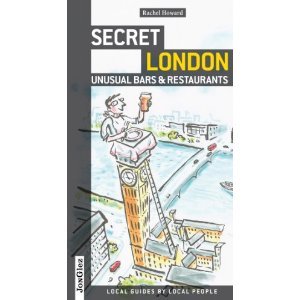 As a rule, new books about London with "Secret", "Hidden" or "Alternative" in the title should be secretly hidden on an alternative bookshelf, never to be seen again. The market became saturated many years ago. The one exception was 2009's Secret London: An Unusual Guide, which rebooted the whole micro-genre by the simple trick of being excellent. One of its authors, Rachel Howard, is now back with a follow-on volume focussing on London's oddest dining spots.

The new volume is every bit as rewarding as its predecessor. Over 100 bars, pubs, cafes and restaurants are listed, all with their own quirks, themes and foibles. You'll guess a few of them: Ye Olde Mitre, for instance, that famously difficult to find pub that used to be in Cambridgeshire; and the Shepherd's Bush subterranean toilets now better known as Ginglik. Most of the suggestions, however, will be unfamiliar to all but the most intrepid of London explorers.

The whole gamut is here, from never-changing hangovers from another age (Oslo Court in St John's Wood, and "deeply unfashionable" Odin's) to the recent trend in hidden speakeasies and members' clubs. Unlike most guidebooks, this one devotes many pages, if not most of them, to the suburban suggestions; you're as likely to be dining in Wembley as Waterloo. And Howard doesn't limit herself to the places with good food and service. She frequently picks out eccentric eateries where the venue or experience makes up for flat fare. She writes like a particularly eloquent friend, eager to tell you about her latest discovery... and the book's all the better for it.

The perfect gift for that friend who thinks Cafe Rouge is a bit exotic.

Secret London - Unusual Bars & Restaurants by Rachel Howard is out now from Jonglez. Buy from Amazon or direct from publisher.