The Londoner Challenge @ Museum of London 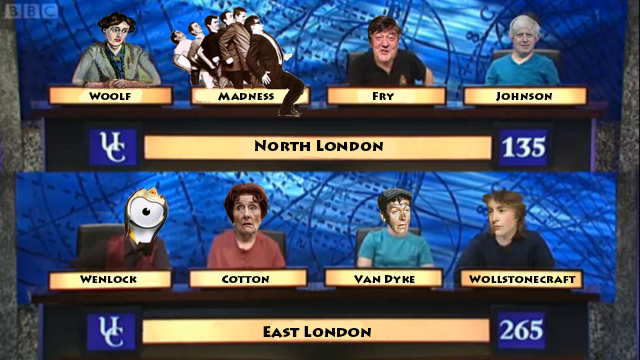 Want to watch or take part in a University Challenge-style quiz, where all the questions are about London?

The Londoner Challenge takes place at the Museum of London on 5 July. In partnership with the museum, we'll attempt to find out which is best: north, south, east or west London...at least in terms of answering trivia questions about the city.

What to expect
A quickfire multimedia quiz with around 300 questions about the capital, all set by Londonist M@. We'll have two semi-finals, followed by a final. There will be buzzers, and there may be the odd Jeremy Paxman impersonation.

Want to be on a team?
Each team will consist of five people (a captain, three other main members, and a stand-in). We have team captains in place already (see below), but are looking for keen Londoners to take up the other places on the four teams. You need to have a love of London trivia, be willing to sit on a stage in front of an audience and be free on the evening of 5 July. To volunteer:

Want to watch?
We've quite a bit of audience space. You can snap up tickets here.

Team Captains
The teams will be helmed by the following four noted bloggers.

(Note: we realise it's an all-male lineup...We did ask several female bloggers, but none were free...we hope to see a better mix on the final teams.)

The Londoner Challenge is at the Museum of London, 5 July 2012, 7-9pm. Tickets are £6, or £5 concession. We've also created a Facebook event page if you want to talk about it before/after.