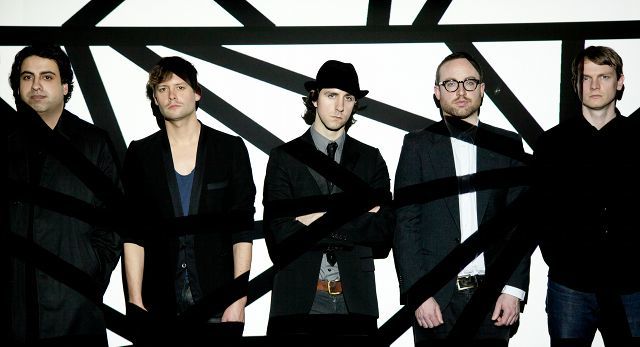 Since rising to prominence in 2005 with their Mercury-nominated first album, A Certain Trigger, Maxïmo Park have combined thoughtful rock and forceful live shows to great effect. With release of their fourth album right round the corner, we asked the band's keyboardist Lukas Wooller (second from left) about the new material, his favourite London venues and what it's been like performing again after a break.

Can you describe the new album for someone who's not heard any of your new material yet?
It sounds like a 'Best of...' we never had, on shuffle. When we started to write the songs for this record, we looked back at the work we had done so far and for the first time we tried to understand what Maxïmo Park did that no one else did. And then we wrote with those things in mind.

Things like a real heart on sleeve emotion married to quite aggressive, catchy pop, with lots going on below the surface. And we also embraced the variety of what we had done before and tried to push it further, taking each song in its own particular direction without worrying how they might all fit together. Then we listed the tracks in an order that contrasted each song with the next as much as possible, like listening to it on shuffle.

What was it like getting the band back together after spending time on your own projects?
It's good for us to have the freedom to do things outside Maxïmo Park. It means that individually you don't have just one outlet – if we're all trying to cram all our creative energy into one outlet, it's going to sound like a horrible car crash.

And what's it been like playing live together again?
On stage there's still the same energy and passion. We try to keep things simple and not have too many bits of equipment so us and the crowd can concentrate on the performance of the songs.

You've played all over, but is there anything unique about playing in London?
When we first played in London we were aware that the city had a reputation of being stand-offish. I think with the music industry being based there, there is a tendency for much of the crowd to be people that work in music and see bands all the time, so they treat it more as work. However, we've always had really genuine crowds that are as energetic as anywhere else.

Do you think much about where you are when you're on tour?
We don't really change our show wherever we play. Maybe in some places a different song is being played on the radio, or one of our songs might be more relevant to a place – like we play The Coast is Always Changing when we're near the sea.

You've played some great London venues over the years. Do you have any favourites?
We've had some great shows at The Astoria and Hammersmith Palais, both of which no longer exist. Our first show ever before we were signed was at The Bull And Gate.

I remember a particularly crazy show at Notting Hill Arts Club where the bass pedal broke and we had to scour the venue for a screwdriver before we could continue. Warp Records were there and offered us a record deal shortly after so we must have coped OK.

I always like shows at the ICA – they are intense and cerebral at the same time.

You've just announced a November tour. Are you looking forward to hitting the road?
We're really excited to be touring again. Our new material so far seems to work instantly live, and having been writing in a studio for so long we're like coiled springs waiting to snap.

It's probably a bit early to be asking this, but what's next for The Park?
At the moment we're focused mainly on summer festivals and touring in the autumn. However, we're already talking about the next record.

We want to keep the songwriting going and try and release another record quite quickly if it feels right. We don't want to take so much time this time, but I think we'd like a different approach in the writing too. We're not sure, we've only just started to talk about it!

Maxïmo Park play Heaven this Friday and O2 Shepherd's Bush Empire on 7 November. Their new album, The National Health, is out on 11 June.