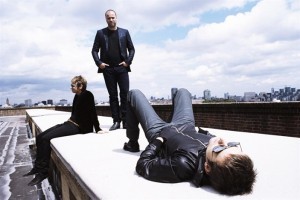 Devon rock trio Muse have written the official London 2012 Olympic song, Survival. The track will be played as athletes enter the stadium, before medal ceremonies and during international TV coverage.

Expect Survival to be stuck in your head all summer, and probably for the rest of your life. Does anyone else still think of Freddie Mercury and the opera singer every time they arrive at Barcelona airport?

The band have said it is inspired by: “total conviction and pure determination to win” adding “we are honoured that the Olympics have chosen our song to officially represent the London 2012 Olympic Games across the globe”.

Muse are closely linked with sport, having been the first band to sell out the rebuilt Wembley Stadium and participated in the torch relay.

The band follows in the steps of Elbow, who have written the track First Steps as the BBC's official theme to the running and jumping. Likewise Blur, who play the closing ceremony concert at Hyde Park, have written two songs for the event, Under The Westway and The Puritan.

Music features heavily in The Sport’s planning. Underworld are soundtracking the opening ceremony with a mix including Sex Pistols’ God Save The Queen and Prodigy’s Firestarter, so even people who haven’t run, jumped, kicked or walked at pace since PE at school – like, say, certain music writers – can feel involved.

Muse play the sold out dates at O2 Arena October 26 and 27, Survival is downloadable now.