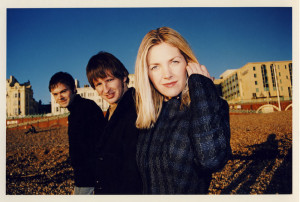 St Etienne at the London Palladium was always set to be a grand event for the 90s stars turned pop revivalists.

Their latest album, Words And Music, received rapturous acclaim, and the anticipation surrounding this gig after its initial postponement thickens the air. It’s almost as if the thickset nature of the middle aged crowd, mainly wearing uniforms of checks or stripes, has expanded from their buckles to season the cavernous auditorium.

The audience mirror St Etienne; they’re of a certain age where the polished sheen has gone and comfort is the priority. The band's lack of appeal to a younger generation is reiterated as Sarah Cracknell is greeted with tumbleweed when introducing When I Was Seventeen’s derivative 80s pop: “Is there anyone 17 here tonight?” Nope: support band Summer Camp are the youngest in the house.

St Etienne are a band of two halves, the alt-pop cinematic wonder of their early career, until 1995’s He’s on The Phone, and the lesser band who peddled euro tinged house, rather than their trademark romantic groove. Tonight they are pounding out the latter with hair-raising house.

On stage they are a band falling short of their heyday. Bob Stanley and Pete Wiggs lurk behind anonymous synthesisers leaving Cracknell to radiate glamorous charm alone. Although joined by a backing singer and guitarist, the stage seems a part time effort compared to their sharp suited full band prime.

Nevertheless, openers Like A Motor Way and Who Do You Think You Are still manage to swell a sense of excitement. Cracknell is in knee boots, silver sequins and white boa, rekindling the schoolboy crushes and retro memories of when vintage film didn’t mean Instagram.

Bizarrely for a band who booked a seated venue, they encourage everyone to stand from the second song, rather than rely on the quality of their music to compel people to their feet. The resultant racks of slowly jiggling bodies remain standing throughout, regardless of what they play.

Their new material is garlanded with brash beats, yet Popular and Haunted Jukebox are merely Xenomania cast offs. Likewise the pounding beats of latest single, I’ve Got Your Music, lacks any St Etienne retro finesse. Nevertheless, the quality of their pop writing is undeniable and if all pop was this good then the charts would be truly exciting. Unfortunately the conveyor belt of electro pop dulls the senses and St Etienne’s take on the familiar fails to sound relevant.

There are, however, moments to pure pop paradise. Sylvie gains a fantastic singalong of “over and over and over again” in between Butlins style in-time clapping, You’re in a Bad Way and their take on Neil Young’s Only Love Can Break Your Heart are masterstrokes in swinging vintage pop. And, of course, He’s On The Phone brings the house down.

St Etienne were a great band, unfortunately they’ve become a nostalgia act hooked on lazy pop; unforgivable when modern pop acts like Niki and The Dove are producing vibrant and excitable electro-dance.

It’s like Madonna’s forthcoming Hyde Park MDNA show; there’s a new album out and it’s punchy and danceable, but the anthems have dried up. All the while MIA and Nicki Minaj are waiting for her crown. Tonight St Etienne’s crown was passed to Summer Camp.