Cavendish Square Gets Statue Made From Soap 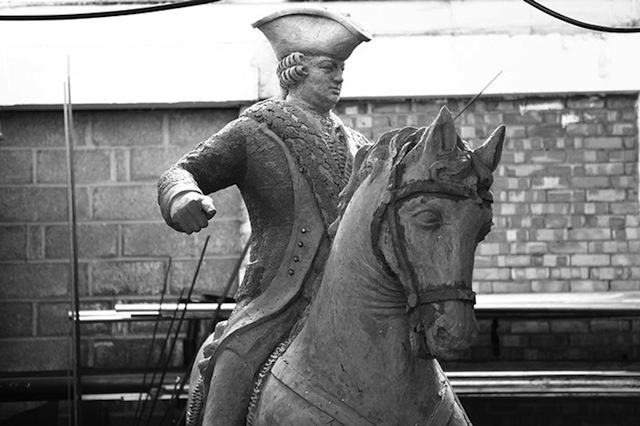 If you've ever wandered through Cavendish Square, round the back of John Lewis, it's likely you'll have noticed the empty plinth at its centre. It formerly sported an equestrian statue of the Duke of Cumberland. The third son of George II enjoyed a brief spell of popularity following the Battle of Culloden, but became something of a hate figure for his part in persecuting the Scottish Highlanders. Hence, his statue was removed in 1868.

Long after we thought we'd washed our hands of him, Cumbers is coming back. Artist Meekyoung Shin has sculpted a replica of the Duke from soap. The slippery likeness will be installed in the square in time for the Olympics and will remain for a year. Here comes the arty bit:

"Shin’s monument, as it weathers through the four seasons, is a testament to the continuously mutable meanings we attach to not only monuments but to one’s history."

Whether Londoners will  race hell-for-lather to see the soapy creation, or will simply wash their hands of it remains to be seen. Given the square's popularity with pigeons, however, we asked our old friend Brian for an avian point of view:

"You're kidding. A statue made out of soap? It depends on what smell they use, but if it's a nice one like, say, Sandalwood, we'll be all over it like a rash. Not used soap in years. Of course rolling around in the lather will be fun when it pisses down, as will sliding off the horse's arse. Can't wait."

Find out more about the project, called Written In Soap, here.