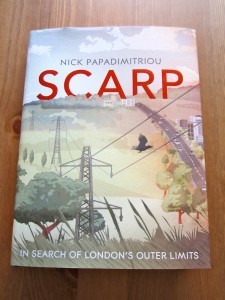 "It was as if the landscape itself was flooding into the front of my mind. I was in a state of ecstatic union with the Middlesex-Hertfordshire borderlands."

Nick Papadimitriou describes himself as a deep topographer. For decades, he's made epic treks across the northern limits of London, an area he calls Scarp. His is a world of sewerage treatment works, scrubby service lanes and edgeland botany. He is a man who grieves for the untold history of an ant colony.

This sub-suburban savant has plenty of devoted followers. Russell Brand, Will Self and Iain Sinclair queued up to sing his praises on recent documentary The London Perambulator. Now he has his own book, and what a strage and wonderful work it is.

A series of walks across Scarp, loosely stretching from Harefield in the south-west to Hertford in the north-east, forms the main thread of the book. Nick is the perpetual outsider. He's the scruffy-looking drifter staring over your garden fence, or sleeping rough on a golf course. He's the arsonist who twice set fire to his school, and did time for burning down his neighbour's house. Yet he writes like an angel, avoiding the abstruse prose often found in "psychogeographic" writing.

The action, if such it can be called, leaps between Nick's present-day peregrinations to scenes from his troubled youth. He also includes several outlandish first-person narratives. In one remarkable chapter, the author attempts a history of Stanmore from the perspective of a telepathic, centuries-old rook. Even Will Self wouldn't go that far.

Scarp is a doubly compelling book: both as an exploration of lands you probably never considered, and as an insight into the workings of their eccentric biographer.

"...were I to die suddenly and be found months or years later, the officials bearing the responsibility of informing my next of kin would be hard put to identify me. And this is as it should be: I'm not Nick Papadimitriou; I am Middlesex."

It's not always a comfortable read. One section weaves a number of unconnected real-life murders into a supernatural storyline. Elsewhere, a confused squirrel is graphically eviscerated by oncoming traffic. But even these vignettes are done with a brutal beauty.

If it's possible to criticise such a unique, magnificent work, it's that it feels a couple of chapters short. Still, always leave them wanting more, eh? If the publisher hasn't already snapped up Nick Papadimitriou on a multi-book deal, they should do so...although maybe the full history of that ant colony near Pinner should remain untold.

Scarp by Nick Papadimitriou is out on 21 June from Sceptre. Buy here.