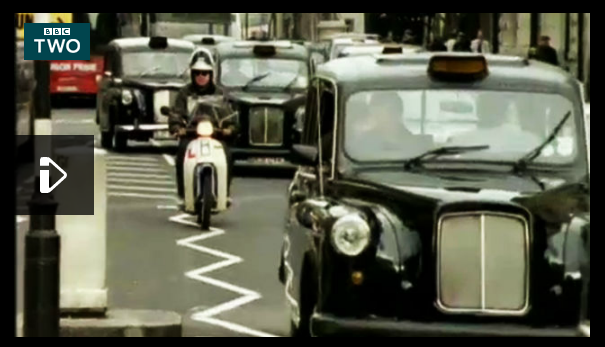 We spent our weekend in front of iPlayer. Why? Because the Beeb has corralled together 27 archive documentaries about London. The televisual vault contains some real gems. Here are our picks from the 12 we've seen so far.

The Debate Continues (1950) How the House of Commons Chamber was rebuilt after the war. Full of little insights, and a chance to see George VI tripping over his tongue in an opening King's Speech.

Eye To Eye: London-New York (1957) A comparison of the two cities with incomprehensibly surreal commentary (but staggeringly brilliant music) by Larry Adler.

Marble Arch to Edgware (1968) John Betjeman takes a trip along the Edgware Road, revealing the police station hidden in Marble Arch, the site of a demolished theatre, the loneliness of suburban tower blocks and a church organ played by Arthur Conan Doyle.

How They Dug The Victoria Line (1969) A fascinating glimpse into the engineering behind the last completely new Tube line to be built in London. Prepare to be dazzled as you watch the construction of a road umbrella over Oxford Circus. Flinch at the lack of any hard hats or safety gear.

Ours To Keep (1985) A youthful Dan Cruickshank, Dennis Severs and Douglas Blain describe the battle to save the old houses of Spitalfields from developers. Interesting to note that not all local residents were supportive of the cause.

Clive James: Postcard From London (1991) The affable Aussie explores the changing face of London, talking to such notables as Michael Caine, Terrence Donovan, Peter Cook and Victoria Wood (whom he once shared a bed with, without realising it).

The selection also includes recent documentaries The Secret History of Our Streets and The London Markets (Spitalfields, Smithfield, Billingsgate). The'yre all available on iPlayer until 1 January 2038, so no rush!