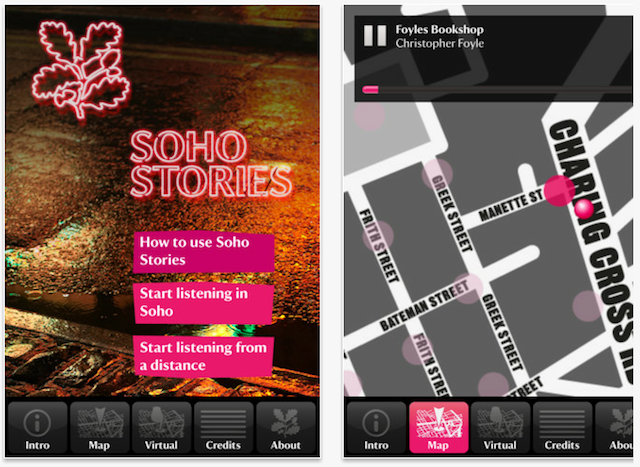 This smashing free app from the National Trust is for iPhone and Android, and contains dozens of audio tracks that reveal the colourful history of the district. Like the recent Hackney Hear app, it works in tandem with the phone's GPS, with audio tracks initiating as you walk into the appropriate areas. A 'virtual mode' lets you enjoy the stories without being present (although you have to remain relatively stationary or it gets a bit confused).

The tech is nothing new, so this app's worth rests on its content. And, we're happy to report, it's delightful. A tremendous amount of work has clearly gone into the research, recording and production. Barry Cryer is our genial guide, introducing us to the bars, clubs and characters who've populated these streets since the Second World War. Commentators include Christopher Foyle, Molly Parkin and Janet Street-Porter.

Find out which foreign secretary was ordered out of the Gay Hussar for attempting to unzip the dress of the French Ambassador's wife (hint: it's not William Hague). Learn where Damien Hirst was "always getting his willy out".  And if you've ever naively wondered why someone might go up a flight of stairs following a sign to "learn some discipline", listen on.

Soho Stories can be downloaded for iPhone here and Android here. It's free!

The app is supported by a series of events around Soho, beginning this lunch time (25 June)