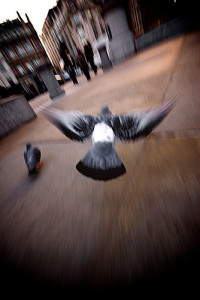 Who among us hasn't fancied being a pigeon for a day, if mainly for their flying skills rather than their questionable hygiene. Fortunately there's now a solution that doesn't involve some kind of improbable science project or a cast-off from the Bird Man Competition: the Pigeon Simulator.

Developed by George Mackerron, a researcher at UCL, the simulator is an ingeniously simple marrying of Google Earth with the motion-detection capabilities of a Microsoft Kinect. The latter device captures the user's motions, such as leaning forward, flapping their 'wings' and so forth, and feeds the movement into Google Earth.

George has released the source code, which is relatively easy to run on your PC or Mac. All you need do is then plug in a Kinect and a new avian life awaits. Just try and avoid straying into the talons of the Trafalgar Square hawk.