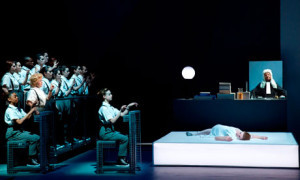 When composer Philip Glass and director Robert Wilson wrote Einstein on the Beach they decided at the start that it should last for four or five hours. This is because they were not interested in creating a plot-driven narrative, and believed that such a length was necessary to enable the music and scenarios to generate an appropriately immersive experience.

The UK premiere of the 1976 opera certainly does this, for while the first hours may drag for some, the piece becomes increasingly spellbinding as listeners adjust their minds to the pace that has been set, begin to recognise the recurring patterns and motifs, and work up to a point where they are almost hypnotised by these.

Einstein on the Beach works around a series of twenty minute scenes whose meaning it is largely up to the individual viewer to decide. For example, in a court scene there are twelve jurors whose arms move in unison; two scribes who adopt kinetic movements; a middle-aged and a child judge; an artist; a lawyer with a neon lighted briefcase, and a meditation on what it means to say that all men are equal. The scenes are linked by two ‘characters’ who chant random numbers or recite Christopher Knowles’ incredible and offbeat text, and writhe in front of dot matrix screens and mathematical equations.

The singing, acting and dancing are all brilliantly precise, which is no mean feat when the chorus must chant various sequences of numbers for sustained periods, ensuring that their concentration never flags for a second. The opera cannot, however, entirely shake off the accusation of overindulgence, as it remains questionable whether the impact would have been in any way reduced had the woman only recited her passage about avoiding the beach half as many times as she did.

Fans of Glass or minimalism (a term that admittedly the composer hates) should seize the opportunity to experience this rarity on our shores. For anyone else, because it invites such a personal response from each listener, it really could be 50:50 whether you become totally immersed in the experience, or find it all a bit of an ordeal! By all means consider the ticket price before booking, but if you do attend, stick with it the whole way. Like us you should find that the longer it goes on, the more you fall under its spell.