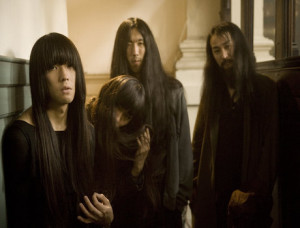 Our first reaction to hearing about Bo Ningen was one of incredulity. So there’s an intense, young Japanese heavy psych band living in London?

With some of our all-time best life experiences thanks to bands from Japan,  it was the equivalent of hearing there'd been a water-slide installed along Oxford Street.

From the endless hot-boxed jams of Acid Mothers Temple to the transcendent drum juggernaut of Boredoms – bands from the East seem to excel at maximizing psych rock elements for increased impact. The riffs are heavier, the drum solos are longer, the album covers are even more acid imbibed.

Doubts crossed our mind – surely these young guys wouldn’t be able to match the heights of their elder countrymen? But no, Bo Ningen are truly awesome. Their live show is definitely where these guys excel, with a theatrical element that sees leaps off speaker stacks, dizzying axe solos and a whirlwind of distorted no-wave riffs. And no article on the band would be complete without mentioning “the hair", the long locks that all four members sport, adding to the band's unique identity.

On Saturday night, Bo Ningen will take to the stage at Dalston's Cafe Oto alongside fellow countryman Damo Suzuki to celebrate the release of "Foreign Affair Confidential", their new collaborative album released this month. With the celebrated Can improviser joining forces with these bright young talents at London's coolest experimental venue, the event promises to be an ace night of Japanese psychedelia. The band were kind enough to answer a few of our questions while on tour in Tokyo. Catch these fellows live – their visas won’t last forever!

You guys met in London, when did you know that you wanted to form a band together?
It came about very naturally; we didn't even decide to form a band.

Were you all in bands in Japan? What kind of stuff did you play then?
We all started playing seriously when we came here.

You’re often compared to the big psych and noise rock bands from Japan – Flower Travellin’ Band, Acid Mother’s Temple, Boredoms, Ruins etc. How much of an influence was the psych scene in Japan? Would you say that non-Japanese bands have had as much of an influence?
Non-Japanese bands seem to have more direct influence from these Japanese psych rock. What I like about Japanese underground bands is that they abuse, twist and distort 'Rock music' and end up producing their own thing because they are so isolated from Europe and the US. So our influence is not one way, it is mutual and multi-dimensional.

You play live very often, is that where you feel your songs work best?
People can use all their six senses in the live experience.

What made you decide to come over to England? Were you inspired by any bands from the UK?
We all had different reasons to come here, studying music and sound art, painting, media studies, etc. We’re not huge fan of contemporary UK bands to be honest, but some of our favourites include King Crimson, This Heat and the Incus records' free jazz guys.

You are all from art backgrounds. What are you guys working on at the moment? Do you tie the band in with your other artwork or do you like to keep some clear water between the two areas?
Everything we do is what we do. There's no difference between art and music. We make artwork, merchandise and posters by ourselves. The artwork carries our music too.

Where are you based in the city, and what’s the best thing about your neighbourhood?
We are all spread around the city, North, North, North East, and South. We love the Freud Museum in Hampstead.

What's the best record store in London?
Kristina Records in Dalston or Second Layer in Highgate.

Can you think of an unusual London location that should be open for gigs?
Inside Battersea power station.

Will we see Bo Ningen at the Olympics?
We will run away from the city during that season.

Any bands from Japan that you can recommend for our readers?
Daisuke Tobari, Yolz in the Sky, Eiko Ishibashi, N'Shukugawa Boys & Naruyoshi Kikuchi.

A Japanese friend of ours with long, flowing hair was walking down the road last week when a girl shouted “BO NINGEN! BO NINGEN!” at him. Your hair is becoming a London celebrity, how it is coping with the fame?
I don't know, but people shouldn't shout at strangers.

You recently released a great 7” [Henkan/Jinsei Ichidokiri] — what’s next in the pipeline?
We are working on new album. That will re-define the long history of psychedelic music and deform what you call 'psychedelic'.

'Foreign Affair Confidential', the collaboration album by Bo Ningen and Damo Suzuki is released in May on So I Buried Records. Bo Ningen's 7" single Henkan / Jinsei Ichidokiri is out now on Stolen Records