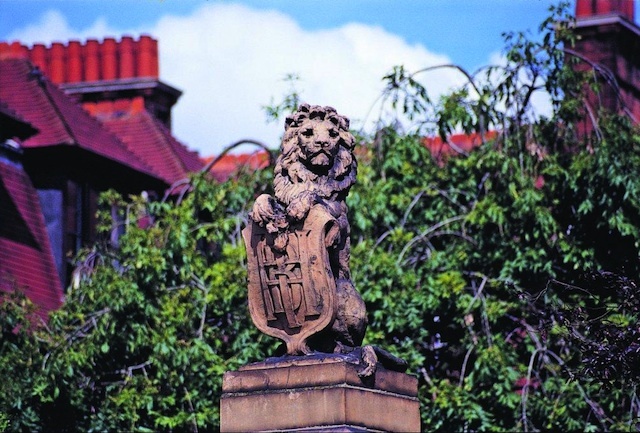 Valerie Colin-Russ has an unusual hobby. She walks the streets of London looking for sculptures of lions. Her new book London Pride: The 10,000 Lions Of London collects together some of the best, from famous lions such as those in Trafalgar Square, to small ornamental heads on the capital's houses. As the title suggests, she's now found over 10,000 of the fake felids. We got in touch with Valerie to learn more about her love of all things leonine.

So the first question on most people's lips will be 'Why?'
Once when I was caught in my car in really bad traffic in Regent Street and at a complete standstill, I noticed a lion’s head gazing out at me from the adjacent building. Rather amused, I looked across the road and there was another one! When the traffic moved on a few yards I looked again and found yet another. I was intrigued and thought I would see how many I could find – though if I had realised what a huge task I had set myself, I doubt if I  would have started!

It's quite an unusual topic for a book. Did you have any trouble convincing the publishers?
No, because it is an unusual (perhaps quirky!) topic, Frances Lincoln were immediately interested when I approached them.

Do you have a personal favourite among the 10,000 lions?
I’ve really grown rather fond of all the ones illustrated in the book – but perhaps my favourite is the one in the Marble Arch gates (below) who is a really fine specimen! 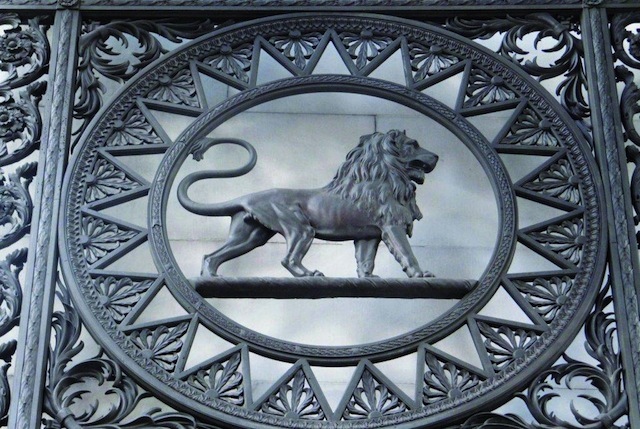 Did you ever get questioned by curious home owners or security guards while out cataloguing the lions?
Once I had just taken a photo of two lions by a front door of a house, when the owner, a Middle Eastern gentleman, got out his car and wanted to know why I was photographing his house. When I explained he said he would have to make a charge for the photo! I just said “Don’t be silly”, got into my car and drove away quickly! On the other hand, as I explain in the book, when I was looking through binoculars and counting the 414 little lions and lions’ heads on the facade of the Palace of Westminster I feared any minute being challenged by a policeman or security guard who might not have believed I was only counting lions! But amazingly no-one challenged me.

Have you ever been tempted by the obvious side-projects, such as counting statues of other animals (elephants, say), or finding lions in other cities?
I did at one stage think I might move on to another animal – or possibly on to cherubs of which there are many on Central London buildings — once I had finished looking for lions, but no, I have had enough now! When in other cities, in the UK or abroad, though, I can’t help keeping an eye out for lions – it has become such a habit!

Has the project ended at 10,000, or are you still on the hunt?
I set myself the arbitrary challenge of trying to find 10,000 – in fact I overshot and found 10,060. Since the book went to print I have noticed another couple – as I’ve said I can’t help keeping an eye out for them – but I am not actively looking for more now.

A book can only accommodate a fraction of the total pride. Are you tempted to start a web site with all the lions mapped and photographed, a bit like London Remembers has done with plaques and memorials?
A lions [web site] on the lines you suggest would not only be a mammoth task but it would not really be practicable because, as the book explains, new lions appear constantly by private houses and old ones disintegrate and unless one monitored every London street regularly the website would never be up to date!

What do you do when you're not spotting lions?
I love London, its history and architecture; I am a retired civil servant  and now a London guide and I take parties on guided walks. I am also a great admirer of the poet and playwright Christopher Marlowe who much influenced Shakespeare, and I am Chairman of the Marlowe Society. I love travel, opera,  Gilbert & Sullivan operettas and the theatre generally. One way and another that keeps me pretty busy!