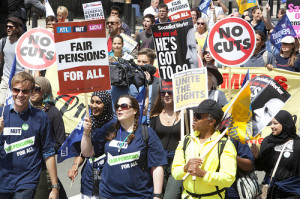 In the third day of protest over the last 12 months up to 400,000 public sector workers are striking over government cuts to pensions.

Led by public sector unions, Public and Commercial Services (PCS) and Unite, the 24-hour walkout is also being attended by the National Union of Teachers (NUT) and that ubiquitous favourite of London transport users, Bob Crow from the RMT. PCS general secretary Mark Serwotka told the BBC:

"We pay more and not a penny goes into anybody's pension fund," he said. In every major public sector scheme - health, education and the civil service - the majority of trade unions have refused to accept these cuts in their pensions. We're going to have the highest pension age of any western European country."

"The march is the only way that police officers can demonstrate their anger. In the past year alone we have lost over 5,200 police officers from the frontline and we are witnessing the privatisation of core policing roles as chief officers struggle to cope with budget restraints. The Government need to be realistic about the outcome of severe cuts to policing; we cannot afford to compromise on public safety."

Policing was high on the agenda for the recent mayoral elections and newly re-elected mayor Boris Johnson has already ousted his former deputy Kit Malthouse in a City Hall shake-up.

See what police bloggers Minimum Cover and Inspector Gadget have to say on government cuts. The Guardian is also live-blogging the march.

Meanwhile, over in Camden, traffic wardens are threatening strike action over pay, joining transport unions in proposed walkouts during the Olympics. While this is doubtless welcome news for Camden's motorists, Camden's coffers could take a £50,000 hit if the action goes ahead.

Bus drivers are also siding with their train-driving brethren to demand a bonus for working during the Olympics and are to vote on whether they will strike over it. Talks are still taking place to avoid tube strikes during the Olympics. Central line driver ASLEF Shrugged talks about the bonus and shift scheduling.

Photo by Nick Atkins in the Londonist Flickr pool.