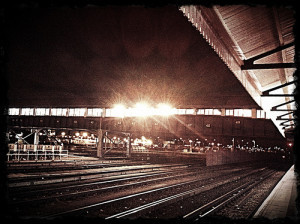 The power went down at 4.20pm and although passengers were still able to use the station, it was later closed at 9.20pm when it became too dark to see properly. Trains were able to pass through the station but passengers were unable to get on or off. The station re-opened shortly after midnight; according to Transport for London services have returned to normal.

The station is described as Britain's busiest and has 180 trains pass through per hour at peak times. Clapham also popped up in our recent analysis of the bits of London which have the most stations named after them.

Photo by Andy Blackwell in the Londonist Flickr pool