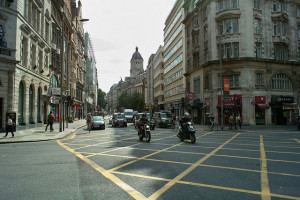 The Sun (we know, go with it) has worked out which London streets generated the most parking fines in 2011.

Southampton Row seems to be the place you're most likely to get hit by a fine if you go over your pay and display time or park illegally. That street racked up nearly £1.2 million worth of tickets alone. This, says The Sun, is an average of 50 drivers a day, which is about five an hour during working hours. In a way, we're surprised it's not more.

Second place goes to Bounds Green Road. The street has two separate controlled parking zones over it, so maybe confusion can partly explain its high ranking? Whatever the case, dodgy parking resulted in £1 million in fines for Haringey council. Other places that are evidently patrolled by particularly keen-eyed wardens and cameras are Clapham Park Road, Barking Road, Old Broad Street (people picking up at Liverpool Street?), Greenford Road, Clements Road in Redbridge, Chiswick High Road, Mare Street and Lea Bridge Road. Have any locals got suggestions for why these roads are so lucrative for the respective councils?

Perhaps surprisingly, even with all its bad press over parking, Westminster didn't get a street in the top 10.

Photo by Chi Bellami from the Londonist Flickr pool