Book Review: The War On Our Doorstep By Harriet Salisbury

By M@ Last edited 113 months ago
M@ Book Review: The War On Our Doorstep By Harriet Salisbury 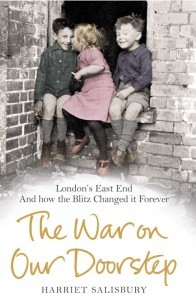 At nearly 500 pages long, The War on Our Doorstep could be said to have an element of doorstop about it. But the girth is justified. Harriet Salisbury has assembled the finest bounty from the Museum of London's various oral history projects, bringing together the story of 20th Century East End life in the original words of its residents.

The title suggests a compendium of Blitz tales, but that's not the half of it. The first 200 pages are concerned with the early 20th Century. Slums and squalor are ever-present, with families sleeping a dozen to a room,  barefooted children hobbling to school, and a universal lack of indoor plumbing. Insects and vermin were an accepted part of life. Wallpaper would crawl with beetles. Many people sat outside on warm days just to escape the creepy-crawlies.

Then came the war. The chapters dealing with evacuations, bombing, rationing, doodlebugs and rocket attacks form the centrepiece of the book, and offer up the most affecting tales of 'Blitz spirit'. The mood is neatly captured by the image on the back cover, in which a queue of aproned ladies wait to hand over their pies to the only person in the street with a working oven. All sport huge grins. This Cockney "we were poor, but happy" stereotype crops up time and again throughout the book, even during the hardest of times.

The later chapters dealing with the closure of the docks, increased tensions from immigration and the problems of tower-block living are also morbidly captivating. The bombs might have stopped, but the insidious erosion of traditional East End communities feels even more crushing in some of these testimonials.

Happy or sad, poor or poorer, the East End of the early to mid-20th Century was certainly an extraordinary time and place to be alive.

The War On Our Doorstep By Harriet Salisbury is out now from Ebury Press. Buy here.