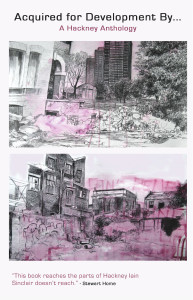 You might think a book of short stories about redevelopment in Hackney would be a rough and tumble of Olympic gripes. You'd be wrong. As Stewart Home says on the cover quote, Acquired For Development By... "reaches the parts of Hackney Iain Sinclair doesn't reach". Instead, we get a literary dolly mixture of alternative takes on the borough, with barely a mention of the Games.

Hackney redevelopment is often in the news agenda. Witness the recent battle over modern tower blocks in Dalston,  and the ongoing encroachment of the City into the edge of the borough. It's a singularly fascinating issue. Redevelopment can bring affluence and amenities to an area and provide much needed new homes. But the same developments can also have a negative effect on lives, pricing out existing residents and shops. It's an emotive subject and one which Acquired For Development By... covers from many inventive and unexpected angles.

Three short stories look to a dystopian future. The Battle of Kingsland Road by Paul Case is a bloody burlesque charting the rivalry between a gang of gentrifiers from Stoke Newington and the fashionistas of the Hoxton Liberation Army — both of whom claim Kingsland Road as their own. Ashlee Christoffersen's 2061, meanwhile, conjures a ghettoised, neo-feudal future for Clapton. Best of the three, in our opinion, is Kit Caless' The Finest Store, in which the trend towards high street homogeneity reaches a hideous natural conclusion. This one deserves a longer treatment.

The non-fiction writing is also top-notch. Natalie Hardwick's Alevism and Hackney hangs out with the area's Alevi population, a cultural group rarely in the spotlight (even our spellchecker claims ignorance). Nell Frizzell's account of a boating life on the River Lea is also enlightening.

Add in plenty of poetry, haikus, a ghost story and the tale of a man who falls in love with an electricity pylon, and you have a superb collection of original writing about London's most fascinating borough. This is Hackney without the hackneyed, and a must-read for anyone who cares about the area.

Acquired For Development By...A Hackney Anthology is out now from Influx Press. Buy it here. Or, better yet, track it down in a local independent bookshop. Some of the authors will appear at the Stoke Newington Literary Festival on 2 June.