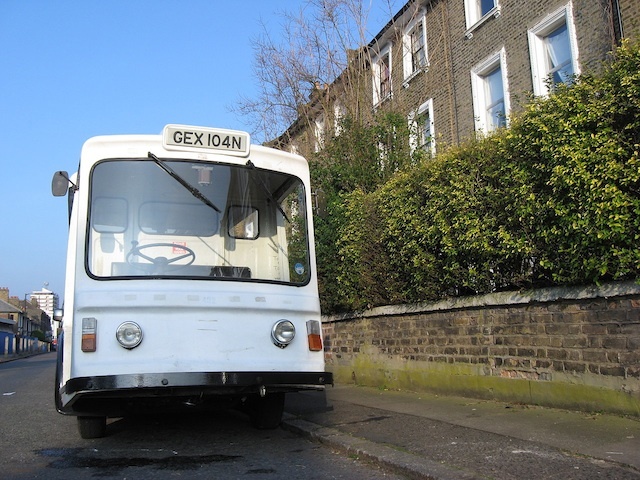 John Burtt runs The Old Milk Float, a small company hiring out an old electrical milk float to events, charities and film sets. Here, John looks at the history of the humble vehicle, and its possible uses in the modern metropolis.

You might not have noticed yet but there is a quiet revolution happening on London's streets as, with a hum of electricity, the humble milk float returns to the capital.

These old British stalwarts were once the toast of the city. Mr Crowter’s first trip in a battery-powered vehicle way back in 1889 (at a breakneck 2mph!) was hailed as a great success. Morrison Electricars began large-scale production at its base in Leicester. Harrods had a 70-strong fleet of electric vehicles.

After the two world wars the milk float took off in a big way, with thousands delivering milk, bread and other supplies all over the country. In the past 20 years, however, electric floats virtually disappeared from our streets. The rise of mega-supermarkets, such as Tesco and Sainsburys, offered economy of scale, and thereby cheaper milk prices. As a result, by 2006 just 13% of milk consumed at home was by delivery there. Today the figure is even less.

But it's not all doom and gloom. The anachronistic old milk floats have recently seen something of a mini-revival, with London’s creative community finding fun and alternative uses. Events collective The Old Milk Float, which I run, has made plenty of noise aboard their 1974 Morrison D6, recently throwing a "kid's rave" for the Trees For Cities charity and turning up everywhere from Lovebox to the Olympics this year.

From Dalston, ‘Maisy’ the milkfloat has been converted to deliver fresh veg for local food company Growing Communities, and has even had a stint onstage at the Old Vic.

Artists and cafes have long been converting disused modes of transport, the recycled Routemaster in Camden or the Tube Train Cafe in Deptford are just two examples, and now it seems many are taking on floats as well. Ben Parry and Jacques Chauchat used a 1975 milk float to create a "sonic junk street machine" for the Kinetica Art Fair, while brothers Sam and Olly Young from Berkshire deconstructed theirs to form a hybrid electric 1965 Volkswagen Beetle. This unique creation not only produced zero emissions, but last year smashed the records at the Alternative Energy Racing tournament at Santa Pod, going from 0 to 60mph in just 1.6 seconds.

Could the seemingly outdated vehicles make a comeback? Milk floats are free from road tax as they are fully electric. This also means they duck the £10 a day congestion charge. Not only this, but with the price in petrol ever rising, it might turn a few heads to hear that the cost of running a float from the mains works out at around just 10p per mile. Sure they can only reach 15 miles an hour. Sure they have the turning circle of a small boat. But right now I can’t think of any other way I’d prefer to get around.