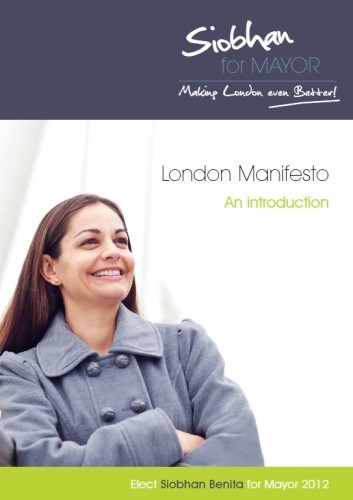 The independent candidate is probably better known for not being able to get on TV than for what her policies are, so here's a quick guide to the various bits of Siobhan's Benita's manifesto. (We understand there are sections on environment and citizens to come, but it's getting a bit late in the day so we went with what's available.)

Transport
Siobhan would freeze all fares at current prices until 2014, reduce fares for students and people earning less than the London Living Wage as well as free travel to anyone looking for work. She advocates a smarter congestion charge, with variable charges throughout the day, to ease congestion and charging companies for digging up the roads. An affordable 'waterbus' for the Thames is also planned.

The one transport policy that caused many of us here at Londonist Towers to audibly groan, however, is the promise to run the tube an hour later on Fridays and Saturdays. A few months ago we published a list of transport promises you shouldn't trust; this was one of them. Boris pledged to do it in 2008, but soon discovered that the knock-on effect for people travelling in early on Saturdays and Sundays wiped out the benefits. She has an answer though, and you can read what it is tomorrow when we publish our interview.

To help cyclists, she would redesign the most dangerous junctions, make sure all new road projects take cycle safety into consideration, make residential roads 20mph and review the cycle network looking at separating traffic and creative shared space schemes. She also says she would make sure all dangerous road users are prosecuted – and that includes cyclists.

Crime
After the Olympics, Siobhan would instigate a comprehensive and independent review of the Metropolitan Police, covering efficiency, productivity and also police culture. Any reorganisation of the service would be based on evidence; it's a refreshing alternate view from the three main male candidates yelling about police numbers. She wants action to protect young people from gangs and organised crime, looking at the reasons people join gangs not just working to break them up. She also plans awareness campaigns and action on violence against women and girls and hate crime.

Housing
Siobhan thinks housing is London's most urgent problem and would establish Homes for London – as requested by Shelter – as a department within City Hall. She'd create a fixed-price housing market for the city, building 20,000 homes a year for sale or rent at half to one-third of commercial rates. Unlike the current system, where a home is only affordable once, hers would be permanently affordable; views that are similar to the Greens. These homes would remain as GLA leasehold properties and could only be sold back into the Homes for London market.

For the rest of the rental market, Siobhan would implement a Mayor's Lettings MOT that would accredit landlords. She's also talking about getting Battersea Power Station de-listed so it can be developed – it's a bold idea, and it's not like the current situation has found a solution.

Education
A much vaunted plank of Siobhan's manifesto is primary school education. She wants to increase the capacity of primary schools, marking the end of portakabin classrooms and keeping class sizes to 30 or below, and to create 167 new primary schools by 2015. She also wants to improve the transition between primary and secondary school, and get more focus on skills that will get young people into work. The Mayor doesn't have any power over education, but Siobhan says she'd appoint an Education Commissioner for London to work with councils and government. She also wants to protect libraries – a popular pledge if ever we saw one, but again something that would involve a lot of lobbying, since the Mayor has no direct power in this area.

She'd also sacrifice £43k of her Mayoral salary to fund a Young Mayor for London.

Business and jobs
Another big policy is to create an Office of Budget Responsibility for London, that would try to stop Mayors splurging money on populist vote-winning schemes that might not actually provide value for money. There's the expected stuff about keeping up investment in infrastructure – with a pledge for citywide WiFi access – attracting inward investment and promoting schemes to get people into work. She is also very much in favour of a third runway at Heathrow.