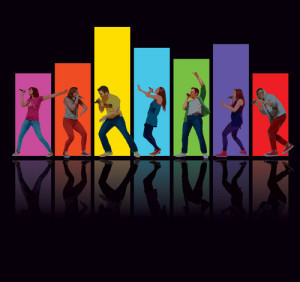 The upside-down purple cow that is the Udderbelly has sprung another surprise hit on us with The Vocal Orchestra.

Created by beatboxer extraordinaire Shlomo, the show comprises of seven young and energetic performers who use only their mics and mouths to create a wildly diverse array of aural wonders from full songs to bombastic sound effects. Ok, so their colour-coordination put us in mind of Mighty Morphin Power Rangers but there is enough effortless invention and classic pop hits here to keep anyone from 5 to 105 happy.

This isn't the first iteration of the Vocal Orchestra. The initial version in 2007 comprised of an accapella group alongside a trio of beatboxers including the female world champion Bellatrix. Since then, the group expanded to 8 before settling on the current all-beatboxer septet.

Shlomo doesn't make an appearance himself but his hand can be seen in his show's references. There's more than a soupçon of homage to beatboxing legend Michael "Police Academy" Winslow (including his foreign-film-dubbing routine), a John Woo wet dream of a battle scene and a "time machine" episode which is effectively a live version of Alan Freeman's old Sunday lunchtime show as the audience is taken back to a particular year in the 1960s, 1980s and 1990s.

The show finishes with an extended encore that Prince would have envious of. With it's familiar songs, fresh faces, and boundless enthusiasm, the whole show can be seen as British beatboxing's brilliant two-fingered salute to American singalong shows like Glee.

The Vocal Orchestra continues until 27 May at the Udderbelly. Ticket information and times can be seen here.