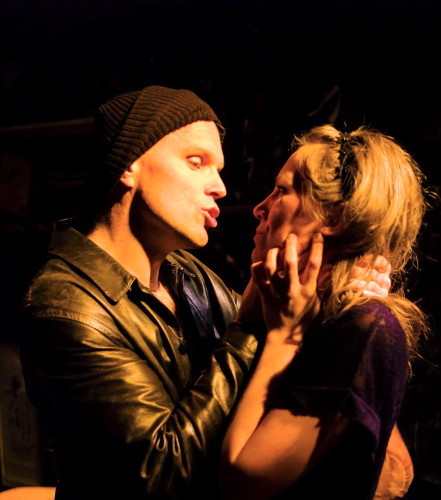 We have been here before. Many times, it feels: ‘stripped-down’ pub opera featuring the concomitant apparatus of skinny jeans, transfer tattoos, funky tights, DMs, bad haircuts, jazz beards and studentish ensembles. With its garret-full of debris, vodka bottles, cellphones, laptops and fairy lights, Carmen at the King’s Head does not disappoint.

The chaise-longue on which the eponymous heroine is eventually throttled could as easily be Mimi’s deathbed and we are disappointingly not a creative bus ride away from Opera UpClose’s original staging of La Bohème at the Cock Tavern which sparked the whole thing off in the first place.

London is now saturated with railway-arch and pub opera, and desperate for more of the originality which inspired the pioneering productions: at least this weekend’s opening of Don Giovanni in a gay bar under Charing Cross has promise of gender-bending and a recognisable baritone in the lead.

Critics agree the drama has been pared to the bone, but lost some rationality in the transfer to its North London crime-squat setting, as well as the fire and passion of Seville’s gypsy band. Rupert Christensen in the Telegraph gave it four stars, though, enjoying its “rough-edged vitality, mostly well-acted, crisply directed and inventively designed” in contrast to Kieron Quirke in the Evening Standard who thought it “short, and comically dreadful … a plotless try-hard mess”.

Ace opera bloggista Intermezzo picked on the “clunky English libretto, a bashed-up piano and an underutilised guitar” and we’d have to agree that you long for some orchestral support for the fabulous tunes in Bizet's lush and filmic score: although Elspeth Wilkes fairly hammered the pub piano into submission in a spirited accompaniment, Sam Johnson’s tentative guitar contributed little.

From a cheery start with the cast striking up the Habanera in the bar, the atmosphere’s charged with a convincing catfight and Carmen’s arrest by Don Jose but immediately deflated by a ten-minute wrangle to seat everyone inside the theatre itself.

Leads change nightly, but we enjoyed the chemistry between authentically Tufnell Park-born mezzo Flora McIntosh and East Sheen's hunky 'singing dentist' Andrew Bain as Jose, although he seemed to run out of both charisma and lung-power by the Flower Song climax.

Also, if you’re going to kill your girlfriend, hammering her face repeatedly into a canvas stage flat isn’t terribly efficient, as well as tension-breakingly laugh-out-loud funny.