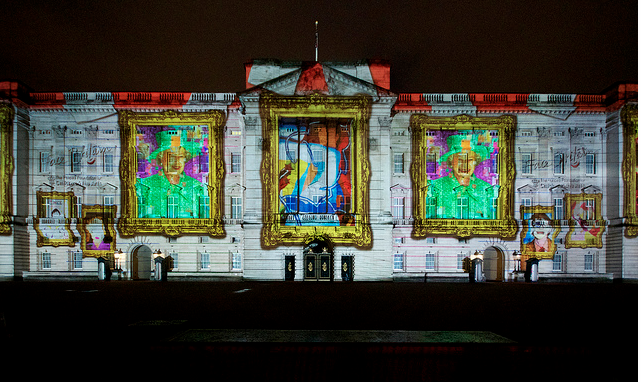 Buckingham Palace will go a little bit Pyongyang this evening. Giant portraits of our beloved head of state will decorate its public facade. Our benevolent leader's likeness will be projected onto the building to celebrate her 60th year on the Throne.

The images are part of an art initiative arranged by The Prince's Foundation for Children & the Arts as part of the Face Britain project, with the Queen's blessing. The projection is composed of around 200,000 smaller self-portraits, contributed by children, well-known artists and celebrities such as Adele and Sir Cliff Richard. The whole ensemble requires 24 projectors to illuminate the entire eastern frontage of the Palace.

You can catch the spectacle from 8.30pm tonight (20 April) until 11.15pm tomorrow. Metro have a preview gallery.

Meanwhile, the Queen's Jubilee concert, featuring performers such as Sir Paul McCartney, Shirley Bassey and Stevie Wonder, attracted more than 1.2 million ticket applications, the Palace has announced. Only 10,000 lucky punters (less than 1% of applicants) were granted a ticket by random selection. The concert takes place in front of Buckingham Palace on 4 June.