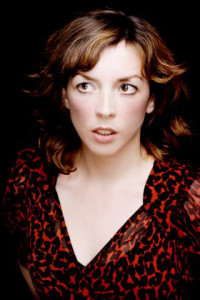 Alongside "crazy" and "festival", "surreal" is surely one of the most over-used (and constantly abused) words in entertainment so for Bridget Christie to have "surrealist" in the title of her current Soho Theatre show is brave, to say the least.

The evening begins in bonkers fashion: Christie arrives on stage as a manic Pope complete with bright green outfit and Popemobile distributing over the crowd the "body" and "blood" of Christ (crackers and water). From that point, she gives over the next hour to her views on Catholicism covering the more obvious areas like evolution, abortion, birth control and that new chestnut, child abuse.

Those expecting full-on surrealism will be sorely disappointed. Opening salvo aside, there is no hint here of the works of Messrs Python, Dali or Lynch. Christie can perhaps be considered the alternative to alternative comedy, with a style somewhere between bar stool chat and bus stop rant and about as confrontational and controversial as Songs Of Praise. Her pro-Catholic material revolves largely around her family — the one she grew up with and the one she has now — with occasional jabs at atheists including Richard Dawkins and her own husband.

Although Housewife Surrealist has been presented elsewhere, we thought we noticed some first night nerves as some gags were rushed and others met silence but generally the show was well-received, especially the finale as Jesus' ascension to Heaven is re-enacted with the aid of a fishing rod. Unlike many of Soho Theatre's recent productions, we saw absolutely nothing here that was groundbreaking, taboo or genuinely surprising in this misnomer of a show.