Broadgate Circle Due For Overhaul 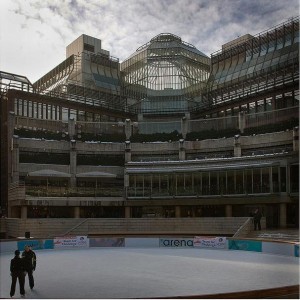 British Land is set to give Broadgate Circle a makeover after English Heritage's bid to have the estate listed last year failed.

Plans are believed to include removal of some office space to be replaced with shops. Although retail units currently occupy the circle area, many are empty. It's a rather dismal and unappealing space albeit popular in the months when the ice rink is in residence. The original architect, Arup Associates, will handle the redevelopment of the scheme it first designed in the 1980s.

Despite its opposition to the UBS development last year, the plans have been well received by English Heritage — an EH spokesperson said:

"We have informally seen the proposals and we are very comfortable with them. We don’t feel they impact on the special-ness of the public space."

The row over Swiss investment bank UBS's new HQ led to the bank threatening to withdraw from the UK and the intervention of culture secretary Jeremy Hunt, who said that Broadgate "fell short of the outstanding quality needed to list buildings less than 30 years old". The Twentieth Century Society and Stuart Lipton, the original developer of Broadgate, both of whom were outspoken in their support of listing, have not been consulted on the latest proposals.