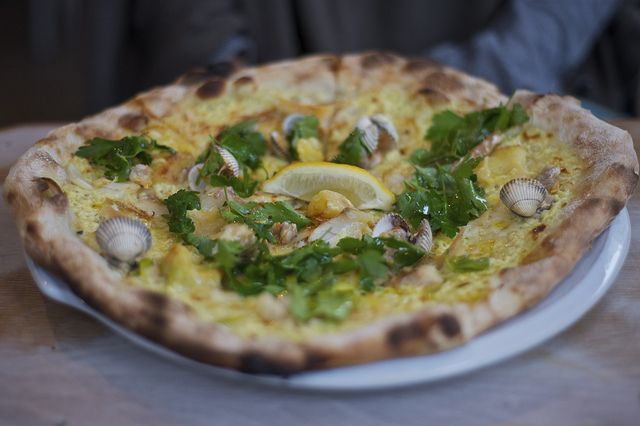 Jamie goes family friendly and redefines the pizza with his latest restaurant offering. And guess what? It's pretty good.

TV personality, cookbook author, restauranteur, chastiser of hillbillies with bad eating habits and the driving force behind a range of products for sale across the world, baby faced Jamie Oliver has a knack for building upon his successes. Considering all this dude's done (and he's still got a few years to go before reaching the big four-oh), you'd imagine he'd be content to rest on his multimillionaire laurels or would have well overextended or overexposed himself a long, long time ago. But apparently he hasn't. And his new eatery, Union Jacks, suggests Mr Oliver still has a tasty idea or two left up the sleeves of his chef's smock.

But Jamie's not the only man waving the Union Jacks banner. The concept is a partnership between Oliver and American “pizza master” Chris Bianco. Widely credited as “the man who perfected dough”, Chris is the head chef and owner of Pizzeria Bianco, a small restaurant in Phoenix, Arizona considered by many to be one of the best places for pizza in the US.

Quite serendipitously then, Union Jacks is a pizza place using a “best of” British list of ingredients. The star of this two-man show is a selection of “flats” - these are essentially pizzas. The flats are cooked in wood fired ovens and cost around £7 to £12. They're really tasty too. And one can see how Bianco got his rep for making just right pizza dough. The flats have a thin, crisp and slightly chewy base that's world's away from the cracker crust of certain high street chains and not as soupy or focaccio-y as more authentic Italian pizzas.

Inside the shiny new “Lego” buildings of Central St Giles, the first, but certainly not to be the last, Union Jacks is a welcoming place. There's a friendly staff. The décor is comfortable and homey and seems to impart a happily lived-in vibe that's agreeable to pretty much anybody … you just need to enjoy eating decent pizzas in a casual setting.

Obviously there's more to dining here than just the flats. Chicken liver pâté with pickled onion and parsley salad (£4.50) is a particularly satisfying starter. The home made ice cream (£1.50 a scoop, 60p for a kid's scoop) is yummy – especially the "Earl Grey tea and biscuits" option. The all British beer and wine list impresses as well. But the flats are the main reason to visit, and they're a very good reason indeed.

Union Jacks is located at 4 Central St Giles Piazza, WC2H 8AB. There's another opening in Chiswick early April and more on the way after that.