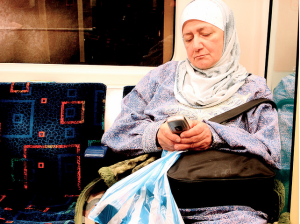 Free wifi coverage will be rolled out across 80 London Underground stations in time for the Olympics. Virgin Media won the contract, which will see ticket offices and platforms fitted with equipment at the company's expense.

After the Paralympics, the service will remain free to Virgin Media subscribers. Anyone else will incur a pay-as-you-go fee, but all users will be able to access basic travel information without charge. The service should be available at 120 stations by the end of the year.

Because London's Tube tunnels are so snug, fitting antennae equipment to trains proved prohibitively expensive. Wifi will not, therefore, be readily available between stations. However, in shorter tunnels, users might be able to pick up signals from nearby stations.

The system should be operational by July 2012, when a super-Wordle of debut emails would no doubt contain the words 'overcrowding', 'late again', 'sodding Olympics' and 'Arggghhh!' rather prominently.

Image by Chutney Bannister in the Londonist Flickr pool.