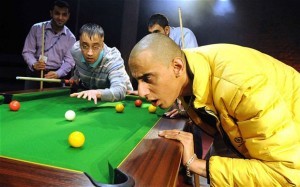 Cabbie-cum-playwright Ishy Din’s debut is the first in a trilogy about the experiences of British Pakistani men living in England. Neatly directed by Iqbal Khan, this short, snappy drama from Tamasha theatre company shoots through at 95 minutes without an interval.

It is the sixth anniversary of T’s death and, as is their custom, four of his old school friends meet up at a dingy snooker hall to mark the occasion with a piss-up and a night of pool. But as the shots are knocked back, secrets start to come out and friendships are pushed to their limits.

All four are ‘snookered’ in some way – trapped in the roles they play in their respective lives. Shaf (a super-macho Muzz Khan) is a taxi driver fettered to an arranged marriage with a fifth child on the way and will do whatever it takes for a way out, a way to make the big time. No matter how dangerous. Kamy (Asif Khan – bouncing clownishly around the stage and speaking a hundred words a second) has taken over the running of the family’s halal butcher’s shop – but remains firmly under the thumb of his father, who bullies and embarrasses him in front of the customers. Career-wise, Mo (smooth and supercilious Peter Singh) is on the up but all he really wants is to be able to have children with his wife. And while Billy (a placid, dipomatic Jaz Deol) has shunned the limitations of a small-town life for London – much to the barely concealed envy of Shaf – it is at the expense of his parents’ love, who have disowned him for abandoning the family.

It’s a boisterous play and, as the more comic parts, the two Mr Khans milk their roles for laughs – and the audience is happy to oblige; there was certainly plenty of guffawing on press night. And yes, live pool takes place. Which seems a risky thing to leave to chance, but either these guys are very lucky or they have spectacular hand-eye coordination – they’re certainly very gifted at sinking the white for comedic effect. Din’s lively premiere tells a tale of guilt, obligation, frustrated dreams and coconuts, challenging any potential preconceptions or generalisations about Pakistani culture along the way. Frankly, it makes a bloody nice change to have young Muslim men represented on stage in something other than the stock orange uniforms.