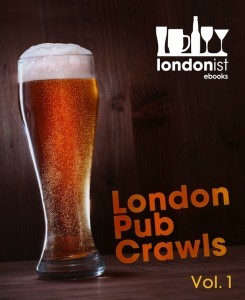 We're delighted to announce our first ever ebook, available now for Kindle. The Londonist Book of London Pub Crawls, optimistically subtitled 'Volume 1', is your guide to 43 London pubs, artfully arranged into ten pub crawls. The book can be purchased right now for less than the cost of a pint.

The ten crawls visit some of London's most rewarding pub neighbourhoods (and, yes, we're including Lewisham), also offering a few themed tours (science and technology, for example). We've even recreated an historic pub crawl, following in the wobbly footsteps of the young Karl Marx, who once had a beer in every boozer on Tottenham Court Road, before smashing up the gas lamps. Here's the inebriated itinerary.

All the content is new, and each pub crawl is illustrated with a hand-drawn map of the routes (plus other random stuff in the areas we felt like mapping). Beers in!

The Londonist Book of London Pub Crawls by Matt Brown, Rachel Holdsworth and Dave Haste is out now for Kindle and devices (such as iPhone) with Kindle reader apps, priced just £1.65 in the UK (prices vary in other territories).