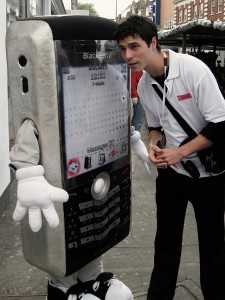 Kit Malthouse, Boris's Deputy Mayor for policing, has been accused of political interference over phone hacking.

Giving evidence to the Leveson Inquiry (PDF) yesterday, former Metropolitan Police (Met) Commissioner Sir John Stephens (who lost his job over perceived links to the News of the World) revealed how Malthouse

On several occasions after Operation Weeting had started and I had returned from sick leave... expressed a view that we should not be devoting this level of resources to the phone hacking inquiry as a consequence of a largely political and media driven "level of hysteria".

The timing of this would be after Boris Johnson declared hacking "a load of codswallop cooked up by the Labour Party" (which brought accusations of contempt of court) but before revelations about Milly Dowler and 7/7 victims. Former Met Deputy Assistant Commissioner, and Lib Dem Mayoral candidate, Brian Paddick sums the situation up nicely

It is quite right for the Mayor’s deputy on policing to question the commissioner as to the level of resources devoted to an investigation. However, once the commissioner has answered, for Kit Malthouse to continue pressuring the Met to back away from phone hacking is political interference with the commissioner's operational independence.

Malthouse isn't the only senior London Tory in trouble at the moment. Brian Coleman, chair of the London Fire and Emergency Planning Authority, broke Barnet Council's members' code of conduct by being offensive in replies to emails from members of the public.

Coleman seems to have assumed that objections to the involvement of Veolia – a services company also working on a light rail project linking up illegal Israeli settlements – with the North London Waste Authority were based on anti-Semitism. He called Israeli-born Ron Cohen "disloyal" and actually told one correspondent

Coleman has been ordered to apologise but so far has refused, seeing himself as the victim of a "rising tide" of anti-Semitism in Barnet.

This probably isn't how hacking happens. Photo by Simon Crubellier from the Londonist Flickr pool