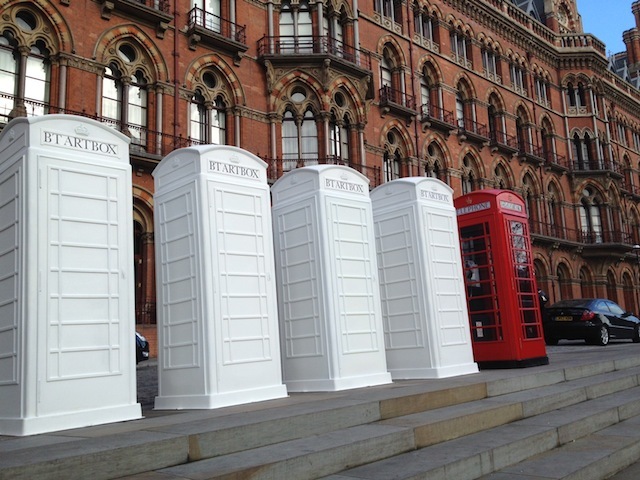 This row of ghostly replica phone boxes was spotted today by Chris Pearson outside St Pancras station. The anaemic quartet appear to be heralds of the BT ArtBox project (online details still sketchy), which will see hundreds of artistically painted phone boxes appear around town. Remember Cow Parade and Elephant Parade? Well, a bit like those, but with phone boxes.

The exhibition promises to be one of the largest displays of public art in London's history. The spruced booths will appear around town throughout June and July. Afterwards, the quirky kiosks will be auctioned to raise money for ChildLine, which celebrates its 25th anniversary this year.

The forecourt of St Pancras is an appropriate place to catch a first glimpse of the project. The Midland Grand Hotel was designed by George Gilbert Scott, grandfather of Giles Gilbert Scott who crafted the classic red phone box. Alas, the four white specimens shown in this photo are a later, evolved design rather than Scott's originals.

Novel idea though this is, it's not the first time the capital's phone boxes have been given a novel lick of paint.

Update 12.10pm: BT has just put out a press release with more details. The boxes will begin appearing in earnest on 18 June and the auction takes place on 18 July at the National Portrait Gallery. You can also view pics of a photo shoot with Esther Rantzen, if you really want to.