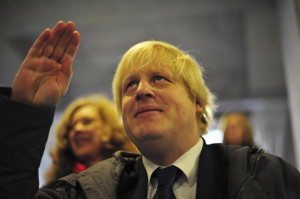 Today we present the first of a pair of opinion pieces explaining why the two leading candidates in this May’s mayoral election don’t deserve re-election. This time it’s Boris Johnson’s turn in the dock. (Don’t worry, Londonist hasn’t gone all biased on you – we’ll be doing the same for Ken tomorrow.) We asked Tom Barry, the blogger better known as @BorisWatch, to put the case against.

Boris Johnson’s public image is a crime-fighting, straight-talking, fun-loving man of the people – yet it is surprisingly hard to find evidence of these qualities in the course of his mayoralty. The qualities usually on display are peevishness, poor judgement of character, a tendency to get distracted by bling and straightforward dishonesty.

The peevishness is instantly obvious to anyone who tunes in to see the London Assembly’s monthly attempts to hold Boris to account. On these occasions, the mayor performs a ritual in which he pretends to be upset that the opposition wants to oppose him. “How can any decent human being think that policy X is a waste of money/total mess/the wrong thing to do?”, he'll ask, mustering a hurt look, to suggest that all this tiresome democratic accountability is getting in the way of something he'd really rather be doing, like being on the radio with Vanessa Feltz or Nick Ferrari telling the city how great he is. You can tell a man by his choice of friends, and Boris does love his sycophants.

Boris's poor judgement of character can also be seen in the ever-revolving door of City Hall. His appointees have variously been sacked in an internal coup (Tim Parker), had their collar felt (Ian Clement), or lied on their CV (Ray Lewis).

Others simply turned out to not be as competent as one might hope. There have been many of those, but the most obvious is Kulveer Ranger, who was moved sideways from transport to environment when it became clear that wearing a waistcoat, and telling everyone how great Boris is, was not enough to make a great director of transport policy for a major world city.

Boris’ love of bling would be fairly harmless if he didn’t control a multi-billion pound budget. That attracts a certain kind of entrepreneur – or, and let's be honest here, spiv. The result has been an endless line of distracting boondoggles: an airport in the sea, a pointless new bus, an expensive way to cross the river, a 300-foot rectal prolapse disfiguring the Olympic Stadium, and any number of stillborn schemes such as the floating river walk, the Living Bridge, or the Nine Elms tube line.

The characteristic common to these schemes is that they give maximum publicity for minimum effort. Getting the funds for, say, a major rail line involves years of lobbying the government, preparing business cases and sponsoring legislation. Much easier to wait for some clown to stick a CGI of a shiny thing in the Evening Standard, put out a press release offering full support, then put your feet up. Good old Boris. Legend.

But it’s the whiff of dishonesty that really grinds my gears. The examples of Boris seemingly lying are far too many for comfort, and far too many to be anything other than a basic character flaw. So, we get hordes of imaginary dead cyclists, victims of murderous bendy buses. The bike hire scheme, used by a minority of well-off Londoners, was meant to cost no public money – yet turned out to be swallowing Section 106 grants prised from developers for local transport improvements. Meanwhile real cyclists, dodging deadly lorries on lethal gyratories, are told to man up and brave it out like Boris does, while the modes of transport most Londoners actually use are seeing cuts in investment, overcrowding, and above-inflationary fare rises.

Consider the dodgy stats on reoffending rates that Boris peddled to the Home Affairs Select Committee, drawing a sharp rebuke from the Chairman of the UK Statistics Authority. Rather than defend his figures, or accept his recommendation that the Mayor's office sign up to the code of practice for official statistics, Boris dismissed his accuser as a 'Labour stooge'. The gentleman in question, Sir Michael Scholar, was in fact a former Private Secretary to Margaret Thatcher. In that one phrase, our mayor demonstrated the peevishness, dishonesty and lack of attention to detail that means I'll be voting 'Anyone But Boris' come 3 May.

Tomorrow, it’s two-time champion Ken Livingstone’s turn for a slating. Why not join us then?