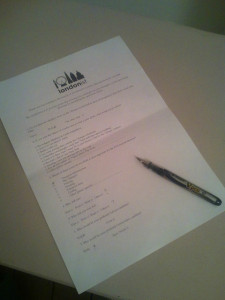 On Wednesday night, Londonist gathered together a group of London experts from all corners of capital for an evening upstairs at the Windsor Castle in Victoria, to harvest their predictions for the upcoming mayoral elections.

As part of the event, we asked attendees to give their opinions on twelve questions on about the elections, and totted up the results for a quick picture of what they thought we could expect from 2012's Ken vs. Boris grudge match.

The headline result was that, whilst a slim majority of those present backed Ken Livingstone as their preferred candidate, a clear majority felt that, when all the votes were counted, Boris Johnson would be victorious, with many commenting afterwards that this was largely due to the boundaries of outer London.

When we asked what people would do with a spare £60m if they were London mayor, a range of answers came flooding in. The equal leaders from our options were "Build a cable car" and "Develop a new bus and put 200 on the road", but write in votes included "Abscond and have plastic surgery", "Turn Oxford Street into a social housing development with swimming pool" and "Whatever I was elected to do".

Next we asked what the most important issues would be at the elections, and transport dominated, with the leading option being transport fares, closely followed by transport infrastructure, with housing and policing in joint third place. When we asked about whether the top three parties had chosen the right candidates, the selected candidates all won, with a strong showing by Steve Norris for the Tories and Lembit Opik for the Lib Dems.

Next we presented a range of rather leading statements, and asked the group to choose which one they most agreed with. In the first, titled “London is...”, most of the group chose “London is stupid to have decided to have the Olympics”, but a more positive close second was the statement that “London is lucky to have two of the UK's finest politicians willing to be its mayor”.

In the second part, most thought that “Boris is an old Etonian who thinks it is his right to be mayor, but would rather be Prime Minister”, though the second most popular choice was “Boris is a pretty decent chap actually”. When we asked about Ken, most chose that “Ken Livingstone is a grasping scheming politician who will do anything for power”, though the second largest group chose “Ken Livingstone is an old man who likes newts”.

Finally, we asked which roads be resurfaced in London, prompting replies of everything from Salisbury Road, Romford, to Deptford High Street, and the troubled Hammersmith Flyover. However, one less picky respondent was just happy for “Anywhere outside Zone 1” to get some care and attention.

The evening ended with the results of a Boris drawing-competition, for which readers will have to wait a little longer.

Attendees on Wednesday were Ianvisits, Snipe, Fresh Eyes on London, Janeslondon, Discovering London, Caroline's Miscellany, 853, one of Occupylsx, Westminster Walking, Londonist and others to whom we apologise if we have missed them.

Londonist's election coverage begins next week. In the run up to 3 May we'll be exploring the issues, probing the personalities, fact-checking campaign claims, interrogating data and finding out what you think. Save the date for our big election results night party on Friday 4 May.